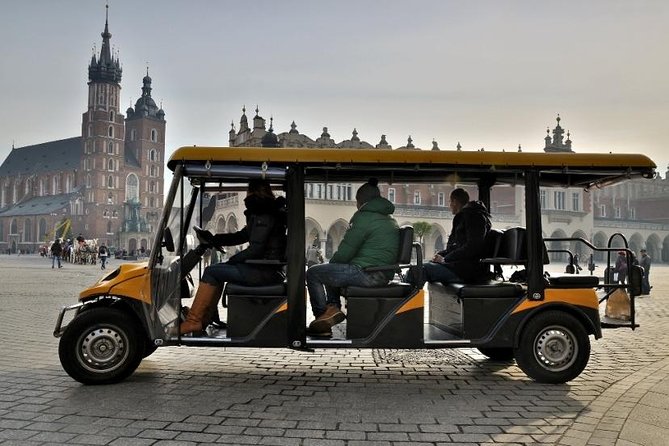 Explore Krakows highlights in an eco-friendly Melex car on this 1 -hour private tour with audio commentary. Settle into a neat and nippy electric car with a private driver at the wheel, and roam the UNESCO-listed Krakow Old Town and top attractions as the audio commentary offers fascinating lowdowns on the passing sights. See Cloth hall and Barbican; venture into quaint Kazimierz, the historical Jewish district; and retrace the World War II Holocaust in the former Jewish Ghetto. See the best of Krakow and enjoy a personalized atmosphere on this unique tour.

One of the symbols of city, a pearl of renaissance architecture, Krakows oldest commercial centre: Sukiennice or The cloth hall is one of the most important elements of the architectural heritage of Krakw.

70 metres (230 ft), 110 stone steps, the executioners dungeons, and 700 years on the Main market square: this is the Town hall tower, the only remnant of the original seat of the city authorities.

A history spanning over eight centuries, a high altar by Veit Stoss (Wit Stwosz), a bugle call, the star strewn murals by Jan Matejko covering the vaulting: all this in a single church! Moreover: in the very centre of Krakw!

One of the most famous and most recognised Polish stages, it has operated continuously since 1893. The building of the Juliusz Sowacki Theatre is counted among the most precious examples of theatre architecture in Europe.

The pearl of Krakows fortifications, the Barbican is one of the most exquisite examples of medieval military architecture in Europe. Never captured during a siege, it passed into legend when its defenders repulsed the attacking enemy forces with believe it or not a single shot!

Once independent, the city situated south of Wawel was the hub of Jewish life in Krakw for centuries, and today it is one of the greatest tourist attractions of the city.

The Tempel synagogue is worth a visit for at least two reasons. Firstly, the stained glass windows, which are among the best preserved of their kind in Poland. The other is its non-orthodox character.

Standing on Szeroka street Street, known not only as the stage of the final concert of the Jewish Culture Festival but also as the centuries-old centre of Jewish life in Kazimierz, is one of the oldest synagogues in Poland preserved in such a good condition.

Szeroka Street is the heart of Jewish Kazimierz. Let a testimony to its significance be the fact that four synagogues used to stand on the street, which was unheard of anywhere else in Europe.

The smallest of the seven synagogues of Krakow, it has long contrasted with the others due to its decidedly more modest decor. After the renovation completed in April 2016, it became the main site of prayer for the members of the Jewish community in Krakow.

Situated in the Podgrze district, which in 1941 was turned into the Krakow Ghetto, the former Plac Zgody [Concord Square] was designated 'Umschlagplatz' under the Nazi occupation, the place where the Jews had to congregate to be deported.

Tadeusz Pankiewicz could not possibly have foreseen while taking over his fathers pharmacy that he would make history together with the enterprise.

Where the tumultuous history of a world war meets everyday life, and private lives a tragedy that affected the whole world.

1 h 30 minutes of sightseeing in Krakw in an eco-vehicle, audio system.

A few breaks for taking pictures.

Please do not bring large baggage as the vehicles only have enough room for passengers to sit. For wheelchair - 2 extra spots must be bought to have space for the wheelchair to place it in the electric car. Operates in all weather conditions, please dress appropriately. This tour/activity will have a maximum of 8 travelers