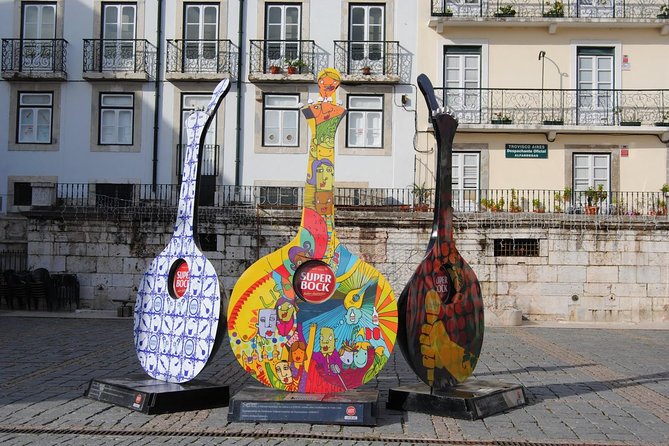 Fado, Lisbon-portugal">Lisbons mournful yet beguiling musical expression is an integral part of Portuguese culture, and is included on UNESCOs Representative List of the Intangible Cultural Heritage of Humanity. Listening to the haunting strains of this unique musical style, a combination of soulful voice and melodic guitars, should be on every visitors list of things to do in Lisbon
Immerse yourself in the quintessential Portuguese experience with this traditional dinner and live Fado show in Lisbon during this 5:30 hours tour. Feast on a delicious Portuguese meal at Guitarras de lisboa Restaurant while enjoying live Fado music, one of Portugals most important folk traditions. After and before dinner, take a panoramic sightseeing tour of the city center in a comfortable, air-conditioned car.
Private tour also includes a free and flexible pick-up (6 pm) /drop-off (11:30pm) from your located accommodations, dinner with fado show and driver/guide.

Lisbon Alfama district, the citys oldest neighborhood and home to many Fado performances.  Dinner at the Fado Restaurant and feast on a delicious Portuguese meal featuring many traditional dishes. While dining, enjoy the sounds of the fadista (Fado soloist), accompanied by classical guitar (viola Portuguesa).

After and before the dinner Fado show, the driver will take you through Lisbons historic city center on a panoramic sightseeing tour. The drive will past many of Lisbons most historic sights magically floodlit for the night.

Dinner with Fado show included in the price.

We start the Tour with Pich-up at your Hotel at 6:00PM.

Before dinner and Fado show  we will explore the oldest and most atmospheric area in Lisbon. We will  stop at Miradouro (View Point) de Santa Luzia the Alfama best viewpoint. At the Miradouro de santa luzia, you can set your compass by the domes of the surrounding churches. Because youll need to get your bearings in the tangle of Alfamas streets. Discover the dome of Santa Engrcia, the church of Santo Estevo and the two towers of the church of So Miguel. Alternatively, we could visit the Miradouro (View Point) of Senhora do Monte.

National Pantheon of Santa Engracia (were Amlia Rodrigues the most famous Fado singer is buried with other other important and famous Portuguese): Built in 1681, Santa Engracia is the National Pantheon, and has a huge central dome and a rooftop terrace from which a sweeping 360-degree panorama of Lisbon awaits for your pleasure. It took three centuries to complete the National Pantheon, which is featured in a baroque style and completed using white stone. Inside is a spacious area full of air, colorful marble carvings and memorial burials of many famous Portuguese artists and intellectuals.

Se de Lisboa: Erected in the 12th century, Se Cathedral, also known as the Lisbon cathedral, is the oldest church in Lisbon. It features details of the Romanesque and Gothic architecture styles, which make it look more like a wonderful castle. Despite being called Lisbon cathedral, it cannot rival the Jeronimos monastery in the beautiful art of its carving and exterior decoration, however it is an important Roman Catholic church for locals.

At 8:00PM we will arrive to the Restaurant where you will Dinner and assist to the Fado Show (include in the price).
Around 10:00PM the Driver/Guide will pick up at the Restaurant and we will drive you in a short Lisbon Tour by night to contemplate the illuminated monuments of the city of Lisbon.

The driver/guide can stop at your request for photo opportunities.