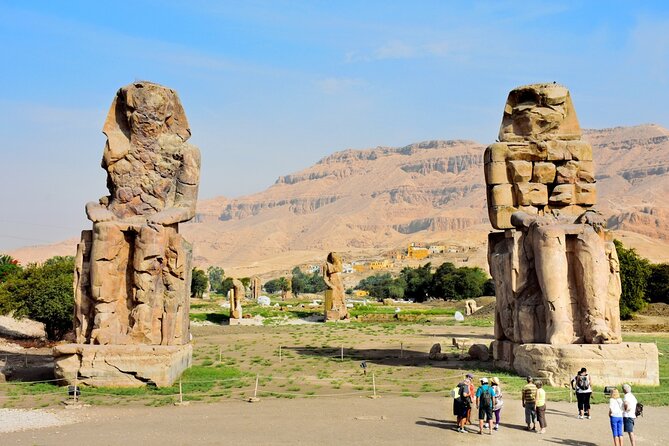 Discover the archaeological treasures of Luxor on this private day trip from Hurghada. Traveling by private air-conditioned minivan, head for Luxor and explore the headline tombs and sites with a qualified Egyptologist guide. Visit the incredible Valley of the Kings, behold the breathtaking Temple of Hatshepsut and Colossi of Memnon, and marvel at the epic columns and courts of Karnak Temple. A felucca (sail boat) ride on the Nile, lunch on a Nile island, and in-depth attention from your knowledgeable guide on this private tour all add to your enjoyment.

Start your private tour in the early morning with a pickup from your centrally located Hurghada hotel. Then, sit back in your private air-conditioned minivan and enjoy the desert scenery as you travel inland to Luxor.

After a roughly 3.5-hour journey, arrive in this bustling city and set out on your tour. As you travel, learn from your qualified Egyptologist guide how Luxor occupies the former site of Thebes, the ancient capital of Egypts New Kingdom. Discover, too, how the modern city lines the east bank of the Nile River, facing the Valley of the Kings on the west bank.

Start your explorations at this age-old necropolis, where 63 New Kingdom royal tombs from the 2nd century BC riddle the mountains. Listen avidly as your guide explains how and why the tombs were built, and then visit three on your own guides are not permitted to accompany you to delve into the richly decorated corridors and anterooms. If time allows and you wish to visit the tomb of Tutankhamen, you will need to purchase a separate ticket.

Afterward, meet back up with your guide and head for the Temple of Hatshepsut. Marvel at this modern-looking temple and its impressive mountainside setting, and wander around its courtyards and terraces as you hear facts and tales about Hatshepsut, Egypt's great queen.

After a photo stop at the two statues of the Colossi of Memnon, continue to an island on the Nile and enjoy a typically Egyptian lunch.

Duly refreshed, make tracks to Karnak Temple, a vast religious complex built between 2055 BC and 100 BC. Rising imperiously from the east bank, this awe-inspiring temple contains three inner temples dedicated to the gods Amun, Mut and Khonsu.

Follow the Avenue of the Sphinxes inside and marvel at the Great Hypostyle Hall, with its forest of 134 huge columns. See the chambers, kiosks and man-made Sacred Lake and hear from your guide how the different temples and structures were used.

During your time in Luxor, enjoy a roughly 30-minute cruise on a felucca, gliding along the Nile River past peaceful palm groves, fields and mountains.

With your visit over, head back to Hurghada in your private minivan, and end your tour with a drop-off at your hotel in the evening.

Services of a qualified Egyptologist guide in Luxor