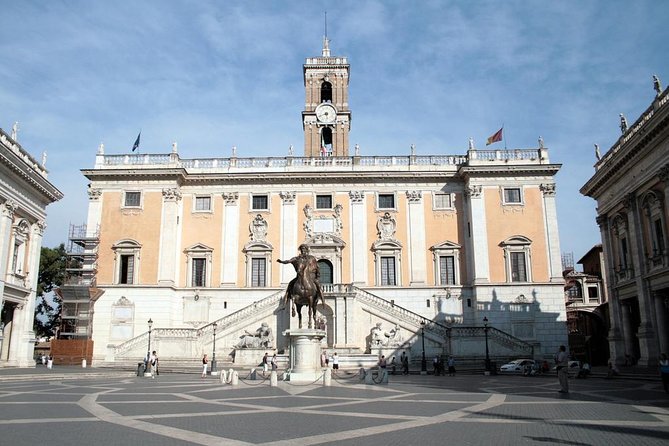 Join this Exclusive Private Guided Tour of the Capitoline Museums to admire some of the most beautiful works of the Roman antiquity. Discover the suggestive paintings of the Pinacoteca Capitolina, the beauties of the Palace of the Conservatives. Admire the equestrian statue of Marcus Aurelius, the terrific views of the Roman Forum and the Egyptian Collection inside the New Palace.

Meet your guide at the entrance of the Capitoline Museums and start this exclusive private tour that will show you some of the most beautiful works of the Roman antiquity.

You could admire a large number of ancient Roman statues, inscriptions, and other artifacts; a collection of medieval and Renaissance art; and collections of jewels, coins, and other items.

The visit starts from the courtyard of the Palace of the Conservatives, one of the two historic seats of the Museum, where you will see the remains of a colossal acrolith representing Constantine. On the first floor you can see the Capitoline Brutus bust; the Spinario, a Greco-Roman Hellenistic bronze sculpture of a boy withdrawing a thorn from the sole of his foot; the Capitoline Wolf, a bronze sculpture of themythical she-wolf nursing Romulus and Remus, which has become the emblem of the Eternal City; and the terrific Castellani collection, which includes approximately 700 magnificent Greek and Etruscan vases. You pass then to the second floor of the Palace where you can admire the Pinacoteca, the oldest public collection of paintings, with works by Caravaggio, Guido Reni, Carracci, Guercino, Domenichino, Veronese, Titian, Tintoretto, Rubens, Pietro da Cortona. You can also admire frescoes and statues from the Renaissance and Baroque Rome. Going down to the ground floor you visit the exedra with the equestrian statue of Marcus Aurelius and appreciate the ruins of the ancient temples still visible in the structure of the building.

Through an underground tunnel, that crosses the Tabularium and from which you can enjoy magnificent views of the Roman Forum, your guide will lead you to the second historic seats of the Museum: the New Palace. It houses statues, inscriptions, sarcophagi, busts, mosaics, and other ancient Roman artifacts. Here you can also see the famous statue of Marforio, the Dying Gaul and the statue of Cupid and Psyche.

A maximum of 7 people per booking