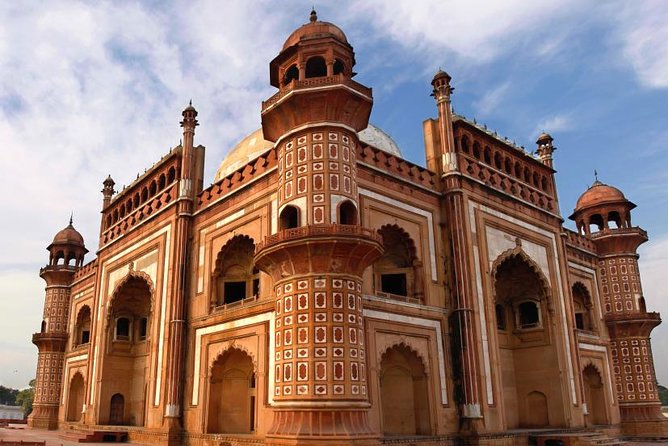 Discover the diversity of Old and New Delhi in one day on a special private tour. The day tour takes you from the spacious planned street of New Delhi to the action-packed lanes and alley ways of Old Delhi. Travel in the comfort of your private air-conditioned chauffeured vehicle as your expert guide helps you to uncover the highlights of India's bustling capital.

Delhi is one of the best examples in the world where 'old meets new'. You'll visit Raj ghat and Shanti Vana, Jama masjid, the Red fort, Chandi Chowk market, Qutub minar, Humayun's tomb and many more sights on this private day tour.

Strolling through the streets of Delhi you will hear the ringing bells of bicycle rickshaws and tooting horns of Mercedes-Benz cars, and even dodge the odd resting cow in the middle of a busy intersection. On this sightseeing tour of Old and New Delhi your senses will come alive as you encounter the many sights and sounds this amazing city has to offer.

In the morning, you will be met at your hotel. Your first stop is Raj ghat and Shanti Vana, the cremation sites of Mahatma Gandhi and Jawaharlal Nehru, India's first Prime Minister. Continue to Jama masjid, India's biggest mosque, and the Red fort. Then, visit Chandi Chowk, an old and busy market, and peruse the many stalls selling various curious from spices to local handicrafts.

After lunch (at your own expense), you will visit new Delhi. Here you will see such sights as the impressive Qutub minar, Humayun's Tome, India gate (War Memorial Arch) and Lakshmi Narayan Temple, a modern Hindu Temple. You will also drive past the President's House, Parliament house, Government Secretariat buildings and Connaught place shopping center.

You will be returned to your hotel at completion of the tour.

Comfortable walking shoes, sunscreen and 1 bottle of water (1 liter or 32 fl oz per person) are recommended