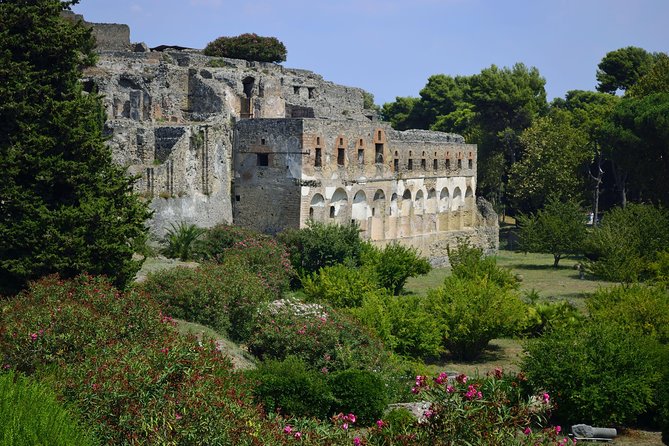 Take a private tour of the famous ruins of Pompeii on this half-day trip from Naples. Italy's most famous archaeological site, Pompeii is an excavated city full of fascinating and haunting remnants of daily Roman life before the sudden eruption of Mt Vesuvius in the 1st century. Your private guide will illustrate Pompeiis tragic fate through captivating stories, facts and anecdotes while taking you to the House of Vetti, the Lupanare brothel, the thermal baths and more. You can choose to have a private guide to show you around Pompeii or you can opt for the transport-only option, allowing you to explore Pompeii on your own while still enjoying round-trip private transport from Naples.

Your driver will pick you up from your Naples hotel, the Naples railway station or the Naples cruise terminal at your selected departure time and take you to Pompeii, located about 30 minutes away. Here, youll be greeted by your private guide and given an introduction to Pompeii.

On your 2-hour visit of this famous archaeological site, youll learn about what happened here one fateful summers day in 79 AD, when Mt vesuvius erupted and volcanic ash spewed over the entire city. Unaware of the imminent danger, most people continued on with their daily lives and, as a result, the entire town and around 20,000 of its inhabitants were buried under tons of ash and pumice.

Nearly 2,000 years later, you can explore the site of this infamous disaster and see first-hand the houses, streets and public buildings miraculously preserved by the volcanic ash. Your private guide, an expert archaeologist, will take you on a private tour of the excavated city, which offers a snapshot of 1st-century Roman life frozen at the moment Pompeii was buried. Explore fascinating sites such as the forum, the thermal baths, several houses and villas, the Lupanare brothel and the House of Vetti with its beautiful frescoes.

After your visit to Pompeii, youll have some free time to explore more on your own before hopping in the car and heading back to Naples.

Transport-Only Option
If you prefer to explore the Pompeii ruins independently, the transport-only option offers private round-trip transportation from Naples and lets you spend time in Pompeii on your own. Your driver will wait for you while you wander around Pompeii for a couple of hours, and then take you back to Naples. There is also an audio guide available (additional cost).

Price is shown per person, based on 11 adults per vehicle

Face mask on board is not mandatory but recommended.