The Hills Are Alive - Salzburg - With Reviews & Ratings

The Hills Are Alive - Salzburg 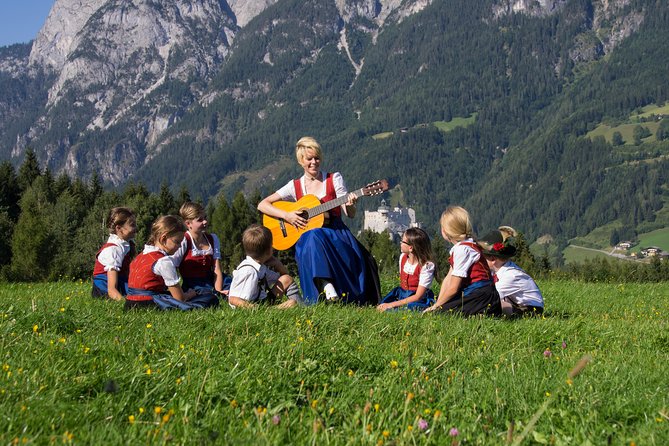 Devote a day to The Sound of Music on this private, customizable 8-hour tour from Salzburg. Traveling by private minivan, trace the footsteps of Maria and the Von Trapps to one location after another, stopping for lunch (own expense) on route. Tour the Do Re Mi scenes in Salzburg, see the famous gazebo, Mondsee, and The Hills are Alive meadow, and absorb the Alpine scenery. Price is per vehicle, with hotel pickup and drop-off included.

Pick up from your hotel or any other location in the city of Salzburg.

On this stop we will explore the beautiful Mirabell Gardens, where the grand finale of Do, Re, Mi was filmed and we will also show you the Pegasus Fountain, Dwarf Garden, Hedge Tunnel and the steps where Maria and the kids finished Do, Re, Mi.

Enjoy panoramic views over the city as Maria and the children did bringing the Do, Re, Mi song into Salzburg from the picnic meadow in Werfen. In the Sound of Music that's the moment when they begin to mix the order of the musical notes up for practice.

This iconic monument fountain, built in the 17th century, was used as a horse wash in former days. It was also featured in the Sound of Music.

Built in the 17th century as a riding school for the prince archbishops of Salzburg and transformed into a theater in 1925. This is the location where the Von Trapps performed Edelweiss and won the Salzburg festivals during the Sound of Music escape scene.

St. Peters Cemetery, is located next to St. Peters Basilica and Monastery. In the Sound of Music the oldest part of Salzburg ( goes back to 696AD ) inspired the escape scene.

Built in 1903 the Mozart Bridge is the oldest Bridge over the river Salzach in the city of Salzburg. In the Sound of Music Marie and the children cross the bridge while pointing during the instrumental end of "My Favorite Things" before they skip along the grassy riverbank.

We will stop at this majestic 17th century baroque fountain, where Maria splashed water just before she boarded the bus to the captains Villa during I have Confidence in the Sound of Music.

The oldest Abbey north of the Alps (714AD) was featured several times in the Sound of Music. Only the exterior of the abbey was used in the movie. Innside shots where done in a studio.

Here we stop for a view over the Lake to the Palace Leopoldskron. This beautiful rococo building was used as the back of the family house in the Sound of Music. The boat scene was filmed here and it used to be the home of the original Gazebo.

Stop and short walk to the 17th century Palace Frohnburg. This are the gates where Maria arrived hopping, swinging here guitar and singing "I Have Confidence" in the Sound of Music.

Hellbrunn Palace, famous for its trick water fountains, is since 1991 the location of the original Gazebo. Some of the most unforgettable and romantic scenes of the Sound of Music, like "16 going on 17" with Liesl and Rolf and "Something Good" where performed in this timeless Gazebo.

Enjoy spectacular views (weather permitting) at the location where Maria was spinning in the field during the opening scene of the Sound of Music while singing "The Hills Are Alive With The Sound Of Music".

This Panoramic Road is considered one of the most beautiful in the Alps. After a scenic drive to the top (1570 meters) your private guide will walk with you to the place where the family hiked over the Alps to Switzerland. (Weather permitting)

Stop At: The Sound of Music Trail, Werfen, Austrian Alps

Sound of Music picnic meadow, where Maria and the children started to sing Do, Re, Mi during their picnic. Enjoy beautiful views to the fortress Hohenwerfen and the Alps.

Home of the most famous Energy Drink, enjoy beautiful architecture.

Enjoy beautiful views above the Lake Wolfgang and the town of St. Gilgen. This is the area that was shown during the opening scene of the Sound of Music. You also have a view to the Schafberg where Maria and the children took the train up to the picnic meadow.

Children under the age of 12 or shorter then 150cm need a child seat. Please inform us.