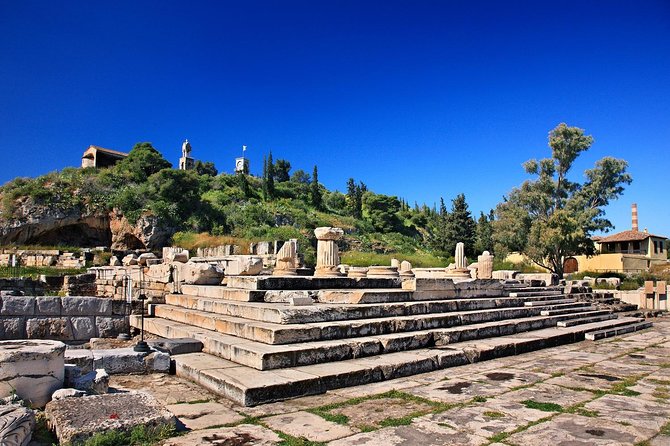 Discover the myths and rituals of Elefsina (Eleusis), a sacred ancient site outside of Athens. Travel by climate-controlled minivan with a private English-speaking guide to the birthplace of the playwright Aeschylus and home of the Eleusinian Mysteries and explore ancient ruins of temples, arches, and fountains.

Meet your local guide and driver at your Hotel and drive in a climate-controlled minivan northwest of Athens to Elefsina (Eleusis). This 4-hour private tour allows flexibility and personalized attention from your guide. Following the ancient route of Iera Odos, youll learn about the Eleusinan Mysteries, sacred rites and rituals that were performed in honor of the goddess Demeter. Your guide will give you a detailed understanding of the complex myths and stories of Elefsina.

Upon arriving at Elefsinas archaeological site, delve into the fascinating ruins of this ancient city. Admire the Roman courtyard with the Temple of artemis Propylaea and examine the remains of a fountain and two triumphal arches. Enter the sanctuary of the Greater Propylaea, near the preserved Kallichoron Well. Continue on to the Lesser Propylaea, and the Telesterion, the main temple of Demeter and the center of the Eleusinan Mysteries. As you wander through the ruins, your guide will explain the significance of each, deepening your understanding of this spiritual city. At the conclusion of the tour, your vehicle will return you to your Athens hotel.

Our guide and the driver will wear a mask throughout the duration of the tour. Whisper audio devices will be given to all our travelers to keep social distance guidelines. Mini Whispers are sanitized thoroughly both from our staff but also inside the charging cases with UVC lights sanitizer.