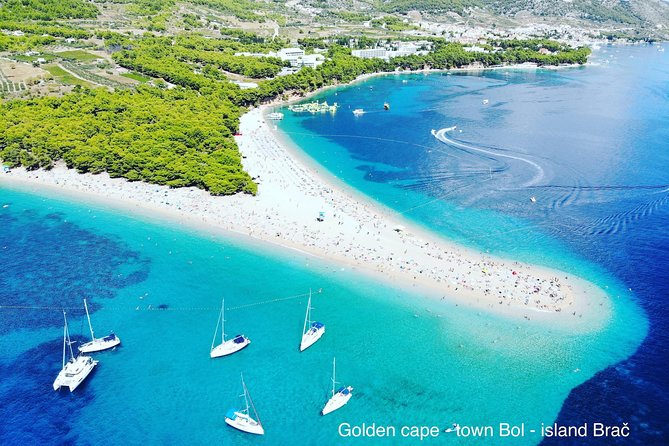 Embark on a private tour of one of Europes most beautiful beaches. Explore the Croatian island of Zlatni Rat, and learn why locals call the narrow spit of land the golden horn. The blue waters between the southern Croatian archipelagos are a sailors paradise. Immerse yourself in island culture with visits to historic villages, and military relics, enjoy the sea and sand, and stroll through the layers of thousands of years of history in the town of Bol. Snorkel equipment, wind gear, and fuel costs are included. There will be time to purchase lunch during the trip.

Meet your guide a central location, walking distance from the cruise ports in Split or Trogir. (Departure time and exact location will be determined before the tour begins).

First, stop for a visit of the oldest town on the island. Bol is home to an impressive 15th century Monastery, and plenty of seaside restaurants to choose from for lunch. After spending some time in Bol, walk for roughly 20 minutes until you reach Zlatni Rat; thought to be one of Europes most beautiful beaches.

The appearance of the beach changes dramatically with the direction of the wind and tides, so make sure to take some pictures to capture the unique "V" shaped shoreline on your visit.
After an hour of relaxing here, move on to explore the sea tunnels, which were used to fortify the island in the age of Napoleon. Climb inside the largest tunnel for some unusual vacation photos.
Next stop for coffee in the ancient village of Milna, on the western side of the island of Brac. Sailors have been visiting this village since Roman times and it is a picturesque scene with boats bobbing in the small port and ochre buildings rising up from the blue sea. After some time on the beach, return to Split at 6:00 p.m. and Trogir at 6:30 p.m.