Private Tour To Kom Ombo And Edfu Temples From Aswan

Private Tour To Kom Ombo And Edfu Temples From Aswan 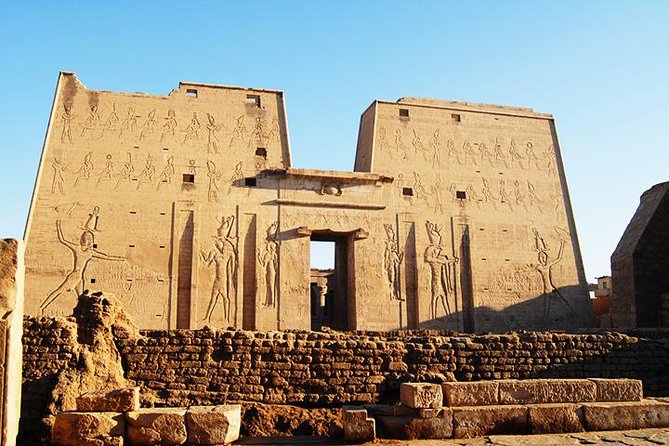 This is a day tour to Kom Ombo Temple, which stands on a high ground overlooking the Nile. Then the tour continues with the Edfu Temple, which is dedicated to god Horus and it is considered the best preserved cult temple in Egypt.

We will pick you up from your hotel or Nile cruise in Aswan and here your tour starts with the Kom Ombo and Edfu temple. We will transfer you in a modern a/c vehicle to Kom-ombo where you will visit the double temple of both Sobek, the crocodile god and Horus the falcon god, located on the river bank. The Kom ombo temple was built during the Ptolemaic dynasty, with additions during the roman period. While much of the temple has been destroyed by the Nile flood, the ruins are spectacular, and some 300 crocodile mummies have been discovered in the vicinity and are displayed inside the temples crocodile museum.

Then we will proceed to Edfu and visit Edfu temple, which is dedicated to Horus the falcon headed god. It is considered the best preserved of all Egypts temples. The temple was built in the Ptolemaic period between 237 57 BC. The inscriptions on its walls provide important information on language, myth and religion during the Greco-Roman period in ancient Egypt. Explore the temples and learn more about the most significant deities from ancient Egypt. Then you will head back Aswan to go back to your hotel.

Any extras not mentioned in the program