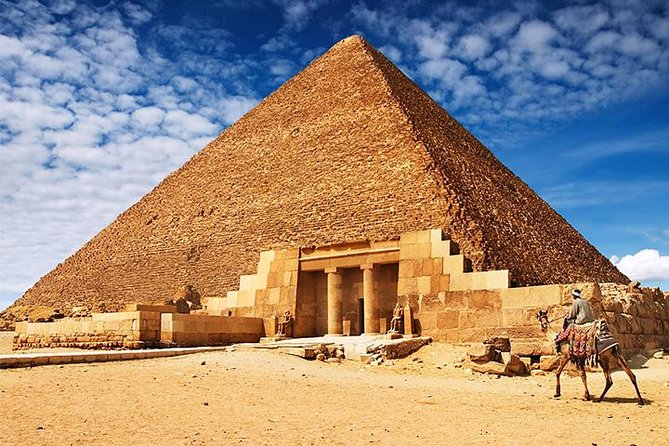 This is a great tour to the most famous pyramids in Egypt. See the Giza Pyramids, the Step Pyramid in Sakkara and the pyramids in Dahshur (the Red Pyramid and the Bent Pyramid). This is a great excursion to see the development of Ancient Egyptian building techniques all in one day.

We will pick you up from your hotel and escort you to the south. Here you will start your day tour visiting the Red Pyramid and Bent Pyramid in Dahshur. Dahshur is a famous royal necropolis in Egypt and holds many famous Pyramids including the red and bent Pyraimds of king Snefru, the first king of ancient Egypt. The site is about 40 km away from Cairo. Then we will move on to visit the Step pyramid of zoser (or Djoser), the world's oldest major stone structure. It was built in the 3rd Dynasty (around 2630 BC) for King Zoser (Djoser).

Lunch will be served at a local restaurant, before we will moving on to enjoy the excursion to The Pyramids of Cheops, Chephren and Mykerinus. The tour continues with a visit to the Great Sphinx,with the head of a pharaoh with a lion's body,which dates back to the time of Chephren. The tour also includes a visit to the Valley Temple, which belongs to the Pyramids of Chephren. Later you will be transferred back to your hotel.