Private Transfer: Florence To Venice With Stop In Bologna

Private Transfer: Florence To Venice With Stop In Bologna 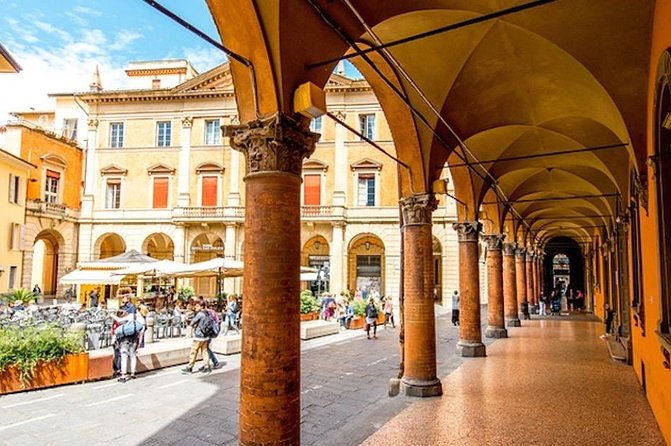 Through our network of drivers, and a widespread knowledge of the area, we can offer personalized transfers all over the national territory, providing a comfortable, safe and accurate service.

On the way from one city to the next you will have the opportunity to make an intermediate stop for sightseeing. This is a perfect solution to optimize your time visiting a city during your transfer.

At the scheduled time, according to your needs, your private driver will pick you up at the hotel. You can move easily from one city to another without worrying about your luggage that will be taken over at the start and downloaded to your destination.

Travelling from Florence to Venice, or vice versa, a perfect stop is in Bologna, located halfway between the two cities. You can spend 2 hours there, visiting the town or having lunch in one of several typical restaurants.

The first settlements of Bologna date back to at least 1000 BC. The city has been an urban centre, first under the Etruscans and the Celts, then under the Romans, then again in the Middle Ages, as a free municipality. Home of the oldest university in the world, founded in 1088, Bologna hosts thousands of students who enrich the social and cultural life of the city.

No more than twenty medieval defensive towers remain out of up to 180 that were built in the 12th and 13th centuries. The most famous among them are the central "Due Torri" (Asinelli and Garisenda), whose iconic leaning forms provide a popular symbol of the town.

The cityscape is further enriched by its elegant and extensive porticoes, for which the city is famous. In total, there are approximately 38 kilometres (24 miles) of porticoes in the city's historical centre, which make it possible to walk for long distances sheltered from the elements.

Besides being a beautiful city, Bologna is also renowned for its culinary tradition and its typical dishes. The rich local cuisine depends heavily on meats and cheeses, in addition to the production of excellent wines such as the Lambrusco di Modena or the Sangiovese di Romagna. Bologna has given its name to the well-known Bolognese sauce that usually accompanies the tagliatelle, a type of long pasta. Not to forget are the mortadella or the tortellini.

After the visit we will proceed to the final destination.

Each traveler is allowed a maximum of 1 suitcase and 1 carry on bag. Oversized or excessive luggage, please inquire with the operator prior to travel.

For the Italian Law all luggage is to be placed in the luggage compartment provided. The driver must agree to any item the client wishes to take into the vehicle with them. You must specify the amount of luggage you will be travelling with, at the time of booking, so we can confirm the right size of vehicle to avoid possible problems due to excess luggage.