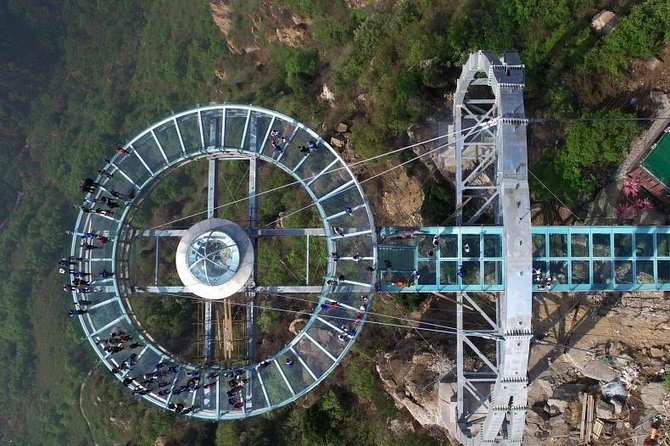 Would you brave this terrifying glass-bottomed platform over 1,300ft drop?The tourist attraction is designed to challenge your inner daredevil.Those brave enough to venture onto the transparent terrace can enjoy scenic views of the surrounding mountains.Simply just hire a driver to theShilinxia (Jingdong Stone forest Gorge Scenic Area),enjoy the self guided tour to the Stone Forest Gorge Scenic Area,your driverwill pick you up from your hoteland return you to the same place at the end of the day. If you wish to have a friendly private guide to show you the way and even take photos for you and your family, you also can book a guide and transfer service option upon booking.There is no factory and shopping stops during the tour.

Your friendly driver will pick you up from your hotel's lobby thentransfer to the Jingdong Stone forest Gorge Scenic Area.The journey will take about 2 hours.

Upon arrival, your driver can assist you to purchase the entrance ticket (at your own cost). Then, start your self-guided tour to to explore the beautiful mountain sceneries and terrifying glass-bottomed platform if you are brave enough .Your driver will waiting for you at the parking lot andpick you up at your pointed schedule. Of course, you can add-on a friendly guide serviceupon booking, if you need someone to take photos andexplore the areawith with you.

Generally, Jingdong Shilinxia is divided naturally into eastern and western part with both offering breathtaking views to all visitors. When you look from afar, the majestic stone forest might give you the feel of solemnity. However, when you get closer, you might accidentally find out that each and every stone is in fact molded in different shapes.

On April 30, 2016,the long-expected glass sightseeing platform Flying Disk/UFO at Shilinxia (Jingdong Stone forest gorge scenic Area) in Pinggu District, Beijing officially opened to the public.The "flying UFO" extends out over 32 metres, and provides those brave enough with 416 square metres of glass viewing platfrom to confidently stride across.The structure was made from alloys containing titanium, allowing it to be relatively light as well as strong and corrosion-resistant.

Book your transfer now to start your wonderful journey with a comfortable and less stressful transport .

You may have a Chinese speaking driver but knows exactly where to go. He will come with a phone translator.