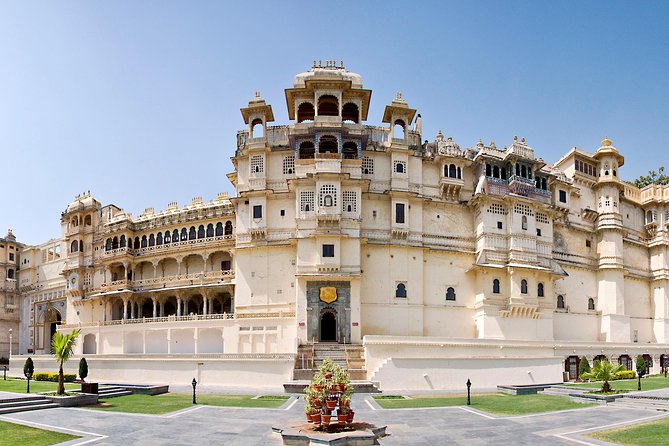 Enjoy the services of your private guide and chauffeur in an air-conditioned car to visit the Grand Udaipur City Palace, the hill fortress of Monsoon palace, the elegant Fountain Garden, a very reputed Hindu temple and much more on this 8-tour of Udaipur City.

Meet your private guide and chauffer at yourhotel lobby to start the tour. Visit the elegant fountain garden called Saheliyon-ki-Bari. Sahelion ki bari' was laid for a group of forty-eight young women attendants who accompanied a princess to Udaipur as part of her dowry. The gardens set below the embankment of the Fateh sagar lake have beautiful lotus pools, marble pavilions and elephant- shaped fountains.

Drive uphill to reach Monsoon palace, also known as theSajjan Garh Palace, is a hilltop palatial residence in the city ofUdaipur. Overlooking theFateh Sagar Lake, the palace offers a panoramic view of the city's lakes, palaces and surrounding countryside. It was built chiefly to watch the monsoon clouds; hence, appropriately, it is popularly known as Monsoon palace.

Take a break for lunch (on your own) before visiting the grand city palace of Udaipur. The palace was built over a period of nearly 400 years being contributed by several kings of the dynasty, starting by the Maharana Udai Singh II as the capital of theSisodia Rajputclanin 1553.

Also visit Jagdish temple, a largeHindutemple in the middle ofUdaipur city and a major attraction among locals as well as tourists.Before the tour ends, you will also get to visit the miniature painting school.Udaipur city is famous for its legendary miniature school of art.

At the end of the tour, youwill be dropped back off to your hotel in Udaipur.

Hotel pickup and drop off (within the Udaipur City limits only)