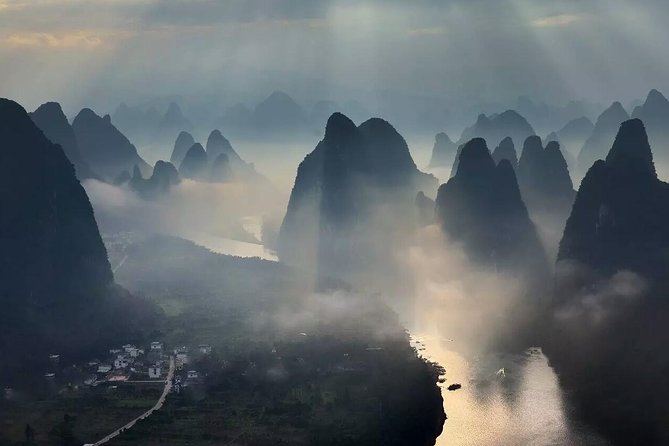 Explore the beautiful Yangshuo region during this full-day private tour from Guilin. Take in the views from the Xiangong Mountain, visit a local farmers market, cruise down tributaries of the Li River on a bamboo raft, explore small villages, and more. This tour is a great opportunity to explore more of the natural beauty of the Guangxi province in a short amount of time.

Take a full-day private tour from Guilin to the Yangshuo region
See the Xiangong Mountain and take in the views of the Li River
Cruise down Yulong river in a bamboo raft and visit a local market
Explore Silver Cave, the representive limestone cave in this Karst region
Enjoy a personalized experience with a private guide and vehicle

At 9am your English speaking guide and private van will pickup you from your hotel in Guilin or Yangshuo and head to Silver Cave. The silver cave is the biggest cave in these region with lots of stalagmites and stalactites which will astonish your eye with their weird shapes and also free your imaginations. Many newly-formed stalagmites and stalactites sparkle in the light looking like silver, hence the name Silver Cave. It take roughly 90 minutes to tour the cave, which is a typical representive of Karst topography.

After you enjoy the panorama view of Karst region, a bamboo rafting trip follows. you will raft on Yulong river, the tributary river of Li River. Enjoy the poetic and picturesque scenery along this river where many famous artists had once painted it in their masterpieces of art work
The experience of bamboo rafting is peaceful and safe
then, you will visit an old village with farm houses that were build 300 years ago. you can enter these traditional styled old house and talk to the residents.

With 1400 years old history, West Street is located in the center of Yangshuo with lots of shops and restaurants on both side of this old buildings street. You walk around here and shop for souvenirs and bargain like locals do or just sip a cup of coffee on the table along this pedestrian street,where is full of exotic feeling

Xianggong mountain,the highest scenery spot nearby Li River.Standing on the top of this mountain, the Li river looks like a green jade ribbon flows sinuously through numerous limestone peaks, boats on the river looks like beetles moving slowly and bamboo raft looks like ants creeping
spend some time on Xinggong mountain top to see the surrounding globe densiest limestone mountains rolling away into horizon, understand World Nature Heritage listed here
This is also the spot where many postcard pictures of Li river were taken.

Li river is one of 15 rivers in the world worth you have a look once in your life, CNN said
After final attraction of the day,You will be transferred back to your hotel afterwards in Guilin or Yangshuo

Tip to tour guide and driver