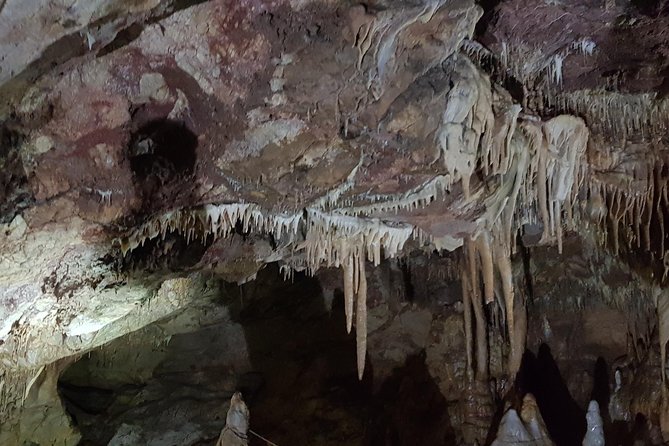 The driver/guide will pick you up from your hotel or any other preferred location in Skopje. Our first stop will be the Gadime Cave, also called the Marble Cave. Although a large part of the cave is still unexplored, we will have an organized visit to the part that is open to the public. We will continue our way to Kosovo's capital, and make short sightseeing. We will see some of the city landmarks like the Newborn Monument, the Clock Tower or the Mother Teresa Cathedral. We will then continue our way to Prizren and make our lunch or a coffee break. We will continue with our sightseeing and have a possibility to visit the Museum of Prizren League and the Sinan Pasha Mosque while passing by some of the city landmarks.

Itinerary
This is a typical itinerary for this product
Stop At: Marble Cave, Gadime e Poshtme
Gadime cave is located within the marble limestones belonging to the Mesozoic era. The cave is full of quite extraordinary crystallized stalagmites and stalactites that have formed over millions of years.
Duration: 30 minutes
Stop At: Newborn Monument, Rr. Luan Haradinaj, Pristina Kosovo
We will make short sightseeing in Pristina, with an opportunity to see some of the capital's landmarks, or simply make a coffee break.
Duration: 1 hour 30 minutes
Stop At: Sinan Pasha Mosque, Sheshi Shadervan, Prizren Kosovo
The mosque overlooks the main street of Prizren and is a dominant feature in the town's skyline.
Duration: 15 minutes
Stop At: Albanian League of Prizren Museum [Muzeu Lidhja Shqiptare e Prizrenit], Rr. Sharri, Prizren Kosovo
The League of Prizren was an Albanian political organization officially founded on June 10, 1878, in the old town of Prizren, in the Kosova Vilayet of the Ottoman Empire. The Museum is dedicated to League's history.
Duration: 20 minutes
Pass By: Our Lady of Ljevis, Sahat Kulla, Prizren Kosovo
Our Lady of Ljevi is a 14th-century Serbian Orthodox church in the town of Prizren. It was converted into a mosque during the Ottoman Empire and then back into a church in the early 20th century. Today, the church can only be seen from the outside, as it is closed for the public.
Stop At: Stone Bridge, Prizren Kosovo
We can make a lunch or a coffee break somewhere in the city and continue with our tour. We will pass by the Stone Bridge, a landmark of the city and a place, where we can see several buildings from different time periods, all in one sight.
After our city tour, we will get back into our comfortable vehicle, and return to Skopje
Duration: 1 hour