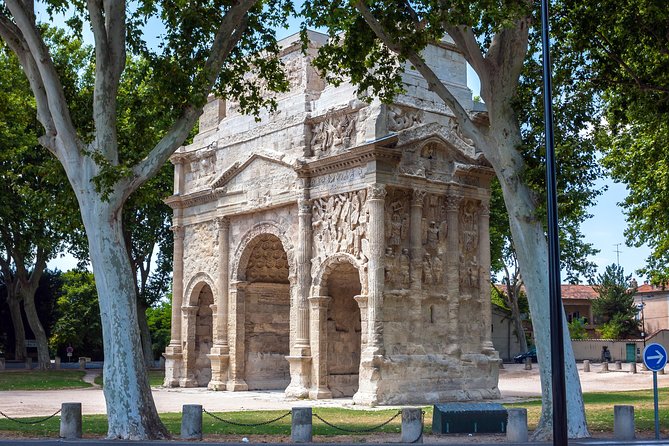 Delve deep into rural France and discover Roman heritage among the rolling vineyards on this 10.5-hour tour of Provence from Avignon. Follow your guide on a tour of Orange and marvel at the Triumphal Arch and the Roman amphitheater. Travel out through the fertile vineyards of Chteauneuf-du-Pape and sample local wines during a tasting session. Admire the UNESCO World Heritage-listed Pont du Gard a Roman aqueduct. Visit the medieval village of Les Baux de Provence, perched high in the Alpilles mountains, and discover the Provenal villages of Gordes and Roussillon.

Meet your guide and hop into your air-conditioned minivan at your hotel in Avignon, then head out of the city to begin your tour of Provence. With thousands of years of history and some of southern Frances finest scenery to discover, Provence holds secrets round every corner!

The first stop on your grand tour of Provence is Orange, founded by the Romans in the 1st century BC. Follow your guide on a tour through the town and discover top attractions such as the amphitheater and the Triumphal Arch widely considered among the most remarkable monuments of its kind in France. Admire friezes commemorating Julius Caesar's victories over the Gauls in 49 BC and listen as your guide brings their stories to life.

Take a scenic drive through the rolling vineyards of Chteauneuf-du-Pape and gain insight into the many grape varieties grown in the region. Afterward, head to a local vineyard with your guide and enjoy a tasting session of some of the fine wines.

After lunch at your leisure (own expense), continue on to the UNESCO World Heritage-listed Pont du Gard, one of the finest remaining Roman aqueducts in the world. Visit Les Baux de Provence a picturesque medieval village in the Alpilles Mountains widely considered the jewel in the crown of Provence.

Head through the Luberon region to admire the beautiful Provenal villages of Gordes and Roussillon, then travel back to your accommodation in Avignon where your tour will come to an end.