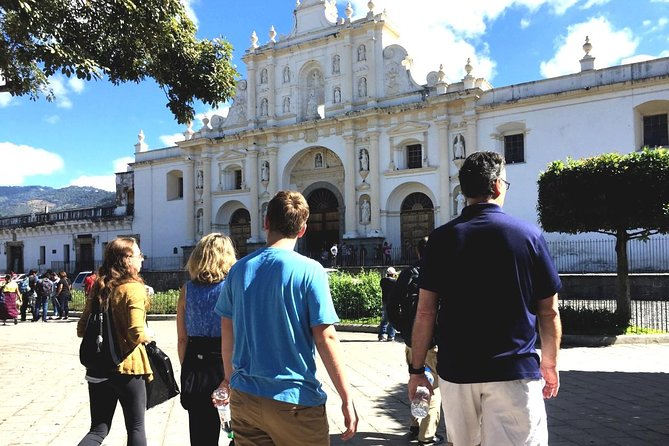 When your cruise ship docks in the port of Puerto Quetzal, visit UNESCO World Heritage-listed Antigua Guatemala. During your shore excursion, a local guide leads you on a walking tour to the citys central plaza and offers expert commentary about colonial monuments, such as La Merced Church and the main cathedral.
Youll pass under the 17th-century Santa Catalina Arch on this full-day sightseeing tour, which includes lunch and round-trip transport from the cruise terminal.

Begin your shore excursion with pickup at the Puerto Quetzal cruise port. Youll be transferred to Antigua Guatemala (Old Guatemala City), designated a UNESCO World Heritage Site for its natural beauty and well-preserved Spanish colonial buildings. Meet your guide and embark on a walking tour through this former capital of Guatemala, whose charming and colorful style permeates everything from its houses, churches, squares and parks to its folklore and cultural traditions.

Your guide will take your group to see some of the top attractions of this beautiful city, enjoyed by visitors from around the world. Your full-day tour includes lunch.

Worry-free Shore Excursion:We will ensure your timely return to the Puerto Quetzal cruise port for this activity. In the rare event your ship has departed, we will arrange for transportation to the next port-of-call. If your ship is delayed and you are unable to attend this activity, your money will be refunded. See our terms and conditions for full details.

Minimum 2 passengers apply. There is a possibility of cancellation after confirmation if there are not enough passengers to meet requirements. In the event of this occurring, you will be offered an alternative or full refund

All departure times are based on the GUATEMALA LOCAL time. Ships sometimes do not adjust their clocks to the local time in port, so it is very important to make sure you meet your tour at the correct local time.

Please search for the Gray Line representative , we will be outside with our Gray Line Logo.

To find pictures of our experiences, search us on Instagram as @graylinetoursgt