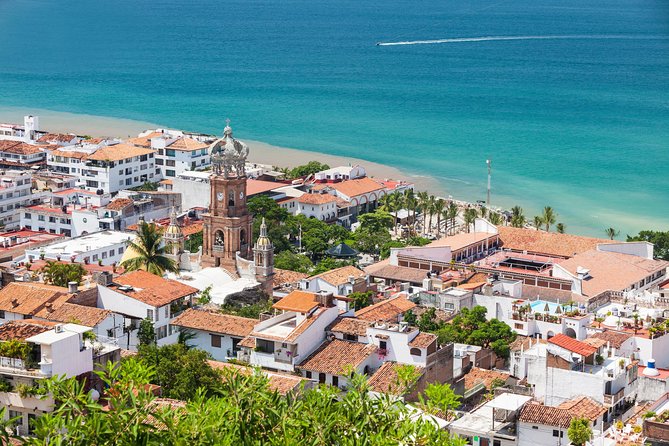 Get more from your vacation in Puerto vallarta! Visit all points of interest including Guadalupe Church, City Hall, the Malecon (Seawall), Rio Cuale, and many more picturesque sites on this great introductory Puerto vallarta city tour.

The tour starts on the north side of the city, where you'll see the newest tourism complex of Marina vallarta, its residential zone, the golf course and the yacht club, stopping for a few minutes to take pictures.

Then, you'll continue on to the city's downtown, driving through 'El Pitillal', one of the popular suburbs. At the sea horse, you'll get off the bus to take an information walk, looking at some of the important buildings and monuments like the city hall and the main church. On this part of the tour, you'll have time for shopping.

On the way back to the bus, you'll walk through the Cuale River Island, a beautiful botanical garden. After this, you'll travel to the south of the bay, where you'll visit a raicilla (tequila) factory to learn about the elaboration process. Last but not least, you'll drive into the rainforest and stop at a restaurant surrounded with lush, green vegetation next to a river, with the chance of having lunch (optional) before returning to your hotel.

Lunch (if option not selected)

Pickup from the cruise terminal is not provided

Important: Itinerary is subject to change during holidays and special occasions. Please contact the local tour operator for information and confirmation