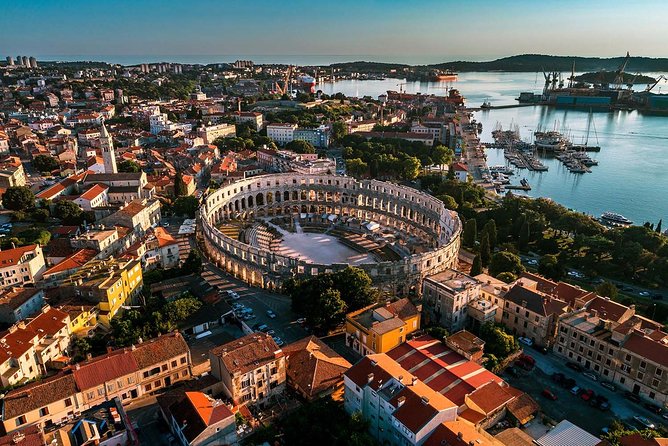 The earliest record of a permanent settlement in Pula dates back to the 10th century BC. Founded by the Histri, an ancient Istrian Illyrian tribe, Pula came under Roman control in 177 BC. In this tour you will experience ancient Roman Pula and see its beautiful monuments.

Your tour begins with a short overview of ancient Pula in front of the Golden Gate, a triumphal arch erected by the Sergi, a prominent Roman family. Passing through the arch, your expert local guide will take you back through history. Walking through the streets of Roman Pula, you will see the remains of Roman homes near the chapel of St. Mary Formoza as well as fantastic examples of Roman mosaic art.
Next, arrive at the center of everyday Roman life: the Forum Romanum, where you will see the Temple of augustus, dedicated to the goddess Roma and its namesake emperor. Stop for some coffee or tea before moving on to explore the Roman Empire.
Visit the remains of an amphitheater that once stood outside the city walls on the hillside of Zaro and from there, you will be directed towards the double doors, so called because of their two arches. Remains of the old city wall are also visible. Simple stone-block doors stand between two Medieval towers while the head of Hercules and his truncheon are carved into the top of a damaged arch.
Next, you will visit the Amphitheater where gladiators fought, the pinnacle of Pula's Roman heritage. It was built in the 1st-century AD during the reign of emperor Vespasian at the same time the greatest and most famous building of its kind was constructed: the Roman Colosseum.
The particular structure of the Pula amphitheater exemplifies all the traditional methods of ancient construction, setting it aside from others. The underground passages once used by gladiators today display a permanent exhibition calledOlive and Viticulture in Ancient Istria, which presents reconstructions of mills, presses and other machines once used for the production of olive oil and wine as well as amphorae that were used for their storage and transport.
In front of the world's sixth largest Roman amphitheater, you will complete your journey through Roman Pula with a memory of the glorious past of the Roman Empire, a heritage we all still imitate and live today.

Tour requires a minimum of two full price adult bookings to operate. In the event of the tour being cancelled due to not meeting the minimum booking requirements, you will receive a full refund.