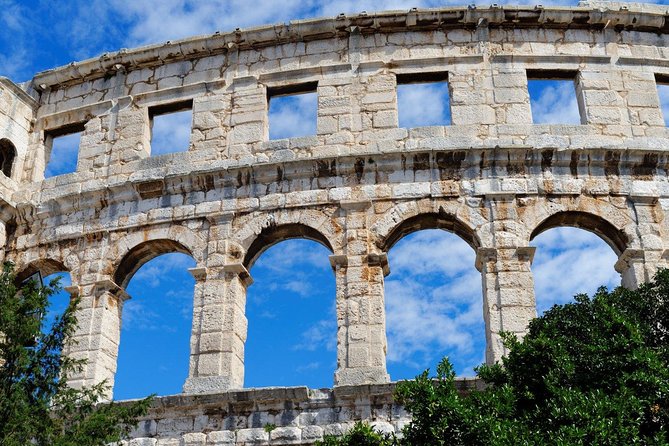 Take part on this cultural 2-hour walking of Pula and learn about the city's Roman history and past.

The earliest record of a permanent settlement in Pula dates back to the 10th century BC.

Your tour will begin with a visit to the Amphitheater where gladiators fought. It was built in the 1st-century AD during the reign of emperor Vespasian at the same time the greatest and most famous building of its kind was constructed: the Roman Colosseum. The particular structure of the Pula amphitheater exemplifies all the traditional methods of ancient construction, setting it aside from others. The underground passages once used by gladiators today display a permanent exhibition called Olive and Viticulture in Ancient Istria, which presents reconstructions of mills, presses and other machines once used for the production of olive oil and wine as well as amphorae that were used for their storage and transport.

From The arena, your tour continues as you walk past the Hercules temple on your way to the town cathedral, Assumption of the Blessed Virgin Mary. The site of the present-day church has been used for religious worship since ancient Roman times, with the first Christian churches having been built int the late 4th and early 5th centuries.

Next, arrive at the center of everyday Roman life: the Forum Romanum, where you will see the Temple of augustus, dedicated to the goddess Roma and its namesake emperor.

Next, you will see the Chapel of St. Maria Formosa, an architectural masterpiece. It is one of the two sixth-century chapels built as part of a large Benedictine abbey that was demolished in the 16th century. Its floor and walls were decorated in mosaics, and it was built in the style of Ravenna churches, the only difference being the use of stone instead of brick.

Next, step back into Roman times by passing through the Golden Gate, a triumphal arch erected by the Sergi, a prominent Roman family. From there, you will be directed towards the double doors, so called because of the two arches through which one enters the inner courtyard. Remains of city walls are also visible on the same site.

Next visit the castle, through one of the perpendicular paths that lead to the top of the city's central hill where a star-shaped castle with four bastions was built in 1630.

Your tour ends at another magnificent Roman gathering place: the Small Roman Theater. The remains of scene, semicircular orchestra and tired section for the audience have partly been reconstructed.

The special blend of Roman, Byzantine and Venetian heritage with the spirit of Austro-Hungarian empire and Croatian tradition will keep this ancient bilingual city in your heart forever.

Tour requires a minimum of two full price adult bookings to operate. In the event of the tour being cancelled due to not meeting the minimum booking requirements, you will receive a full refund.