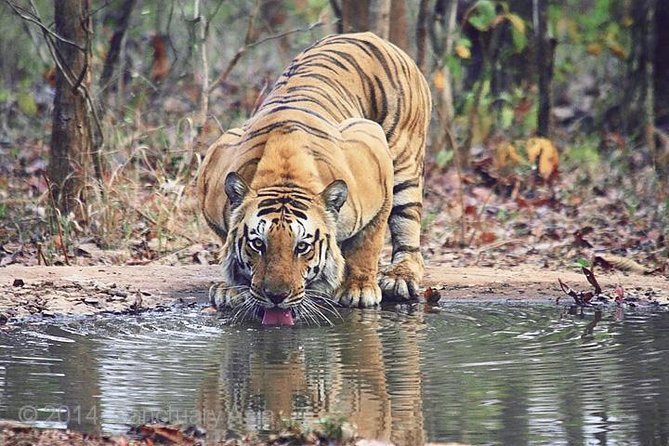 Get to know the highlights of the Golden Triangle on a 4-night tour that includes stops in Agra, Bharatpur, Jaipur, Delhi, and a safari in Ranthambhore National Park. Learn about the culture and history of each stop through a guide, and immerse yourself in the nature of bothKeoladeo Ghana National Park in Bharatpur and Ranthambhore National Park, where Bengal tigers roam. Four nights accommodation in 5-star hotels, meals as per itinerary, all transportation, entrance fees, local guides, Rickshaw (Tricycle) ride in Keoladeo Ghana National Park in Bharatpur and Jeep safari's in Ranthambhore national park included. This private tour ensures personalized attention from your guide and a flexible itinerary.

Stop At: Humayun's tomb, New Delhi, National Capital Territory of Delhi
Humayun's tomb (Unesco World Heritage site) - is the tomb of the Mughal Emperor Humayun in Delhi. The arched facade is inlaid with bands of white marble and red sandstone, and the building follows strict rules of Islamic geometry, with an emphasis on the number eight.
Duration: 1 hour

Stop At: Qutub Minar, New Delhi, National Capital Territory of Delhi
Qutub minar (a UNESCO World Heritage Site) - The Qutub minar that gives the complex its name is an unmissable, soaring Afghan-style victory tower and minaret, erected by sultan Qutb-ud-din in 1193 to proclaim his supremacy over the vanquished Hindu rulers of Qila Rai Pithora.
Duration: 1 hour

Stop At: Lotus Temple, New Delhi, National Capital Territory of Delhi
Designed for tranquil worship, Delhi's beautiful Lotus temple offers a rare pocket of calm in the hectic city. It is shaped like a lotus flower, with 27 delicate-looking white-marble petals. The temple was created to bring faiths together; visitors are invited to pray or meditate silently according to their own beliefs.
Duration: 1 hour

Stop At: India gate, New Delhi, National Capital Territory of Delhi
This imposing 42m-high stone memorial arch was designed by Lutyens in 1921. It pays tribute to around 90,000 Indian army soldiers who died in WWI, the Northwest Frontier operations and the 1919 Anglo-Afghan War.
Duration: 30 minutes

Pass By: Parliament house, New Delhi, National Capital Territory of Delhi
This circular, colonnaded building, designed by Edwin Lutyens and Herbert Baker, was where the 1947 handover of power from Britain to the newly independent India took place, and parliament still meets here.

No meals included on this day.
Accommodation included: Overnight in Jaipur at Hotel Hilton (5-star) or similar

Stop At: Amber Fort Palace, Jaipur, Jaipur District, Rajasthan
Amber Fort - The magnificent, formidable, honey-hued fort of Amber (pronounced 'amer'), an ethereal example of Rajput architecture, rises from a rocky mountainside about 11km northeast of Jaipur, and is the citys must-see sight. It comprises an extensive palace complex, built from pale yellow and pink sandstone, and white marble, and is divided into four main sections, each with its own courtyard.
Duration: 2 hours

Stop At: Jal Mahal, Jaipur, Jaipur District, Rajasthan
Photo Stop at Jal Mahal (Water Palace) - Near the cenotaphs of the maharanis of Jaipur and beautifully situated in the watery expanse of Man Sagar, is this dreamlike palace. It's origins are uncertain, but it was believed to have been extensively restored if not built by Jai Singh II (1734).
Duration: 15 minutes

Stop At: Hawa Mahal - Palace of Wind, Jaipur, Jaipur District, Rajasthan
Photo Stop at Hawa Mahal (Palace of Winds) - Jaipurs most distinctive landmark is an extraordinary pink-painted delicately honeycombed hive that rises a dizzying five storeys. It was constructed in 1799 by Maharaja Sawai Pratap Singh to enable ladies of the royal household to watch the life and processions of the city.
Duration: 15 minutes

Stop At: City Palace of Jaipur, Jaipur, Jaipur District, Rajasthan
The City Palace is the residence of the royal family. A complex of courtyards, gardens and buildings. There are palace buildings from different eras, some dating from the early 20th century. It is a striking blend of Rajasthani and Mughal architecture.
Duration: 1 hour

Stop At: Jantar Mantar - Jaipur, Jaipur, Jaipur District, Rajasthan
Jantar mantar Observatory (a Unesco World Heritage Site) - is a collection of curving geometric buildings that are carefully calibrated to monitor the movement of the stars and planets.
Duration: 1 hour

Stop At: Ranthambore Jungle Safari, Ranthambore National Park, Sawai Madhopur District, Rajasthan
Enjoy afternoon safari in the tiger reserve in a shared Jeep in search of tigers. The Ranthambhore national park, which is considered to be the best place in the world to photograph the tiger in its natural habitat, is a wonderful place for bird-watching too.
Duration: 3 hours

Stop At: Taj Mahal, Agra, Agra District, Uttar Pradesh
At sunrise visit Taj Mahal (a Unesco World Heritage Site) - widely considered the most beautiful building in the world. Built by Shah Jahan as a memorial for his third wife, Mumtaz Mahal, who died giving birth to their 14th child in 1631.
Duration: 2 hours

Stop At: Agra Fort, Agra, Agra District, Uttar Pradesh
Agra Fort (a Unesco World Heritage Site) - is a historical fort along the bank of the Yamuna River in the city of Agra. It was the main residence of the emperors of the Mughal Dynasty until 1638 and one of the finest Mughal forts in India. Walking through courtyard after courtyard of this palatial red-sandstone and marble fortress, your amazement grows as the scale of what was built here begins to sink in.
Duration: 1 hour

Meals as specified each day in itinerary (B = breakfast, L = lunch, D = dinner)

All taxes and handling charges

Transportation to ascend/descend the hilltop Amber Fort in Jaipur

Wear colors that blend with the forest, khaki, brown and olive green are ideal colors to wear in a national park. Animals might get frightened when they see bright colors since they are not used to them

Passport name, number, expiry, and country is required at time of booking for all participants