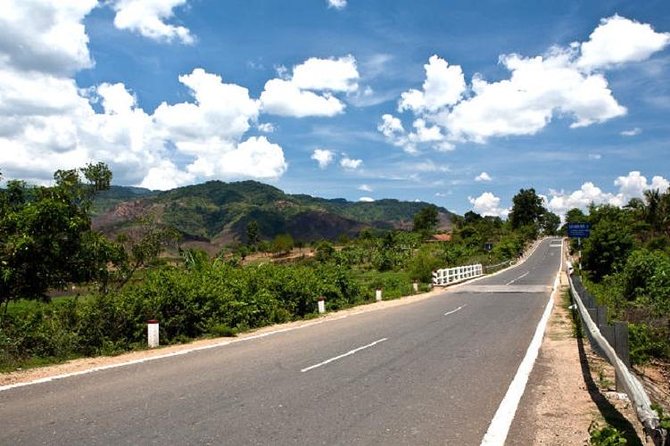 Ride a motorbike along the Ho Chi Minh trail. Pass the Prao and throught villages on the way.Ride through the pristine jungle along the border of Laos. VisitKhe Sanh combat base, DMZ and historical attractions in Hue.

We will depart at 8:00 am, stop and visit the traditional pottery village of Thanh Ha and drivethrough rice fields before stopping at the Cham tower and historic American war monument.Along the way to the Ho Chi Minh trail, we will stop to swim and relax at the waterfall. Wewill then continue into the highlands to the village Co Tu minority and have dinner at a localrestaurant.

After breakfast, we will continue the adventure along the Ho Chi Minh Trail, visiting anotherminority village. We will then ride through the pristine jungle along the border of Laos andspectacular mountain passes and tunnels before stopping for lunch. After lunch, we will leavethe A Luoi, on the Ho Chi Minh Trail to Khe Sanh where we will visit the Rock pile: a base forAmerican long-range artillery nearby. Khe Sanh combat base is a valley surrounded entirelyby rolling mountains and forest. It was the site of one of the most controversial battles of theAmerican War.

We will drive along Highway 9, through Carol Camp, Hien Luong bridge: known as the PeaceBridge, a beam bridge built from steel by the French in 1950 which marks the border betweenNorth and South Vietnam before Here and Ben Hai river: an important landmark in the partitionof the country into a northern and a southern zone along the 17th parallel by the Geneva Accordsof 1954. We will then arrive at the Vinh Moc Tunnels, where an entire village went undergroundin the 1960 to survive the bombing, The complex of tunnels, located deep in the VietnameseDemilitarized Zone, includes wells, kitchens, rooms for each family. After exploring the Vinh Moctunnels, well travel through the tunnel which leads us to the local beach here, where you are freeto choose your lunch. After lunch, we will drive along the coast to Hue. On the way, we will visitthe Quang Tri citadel which suffered 81 days and nights of fire bombing in 1972.

All is applied in USD

If you need any help, free to contact us via info@asiatravelimage.com