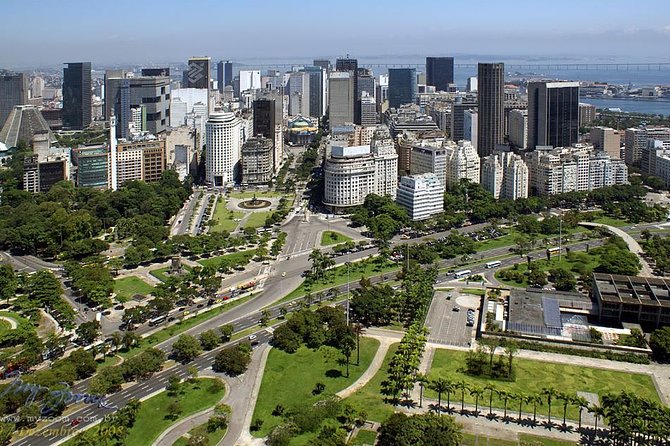 With this touryou will have the chance to see and visit the main attractions in Downtown Rio, the oldest part of Rio de janeiro!

The Abbey of Our Lady of Montserrat, more commonly known as the Mosteiro de So Bento (Monastery of St. Benedict), is a Benedictine abbey located in downtown Rio de Janeiro, Brazil.
The abbey was founded by Benedictine monks who came from the state of Bahia in 1590. It is still operational today, along with the Colgio de So Bento (St. Benedict College) nearby.
The faade was part of the original Mannerist project and featured a centralized edifice with three archways at the entrance, as well as a triangular gable. Two towers crowned by pyramidal spires flanked the entryway. After passing through the entrance archway, the building houses a tiled porch and iron gates from the nineteenth century.

With architecture inspired by the Mayan pyramids of Mexico, the conical shape is believed to give proximity to God. Four stained glass windows run from floor to ceiling forming a cross at the top. Acoustics are "heavenly" here!

The Maracan Stadium, was inaugurated in 1950 to host the World Cup. It is the largest stadium in Brazil, with capacity for more than 78 thousand fans. The "Maraca", as it is also called, besides the games of the national champions, is the Brazilian and of other great international competitions, is the stage of the great musical spectacles.We will not go inside it and will make a quick stop outside, at Bellini's statue, for pictures visit.

Fort Copacabana is a military base at the south end of the beach that defines the district of Copacabana, Rio de Janeiro. The base is open to the public and contains the Museu Histrico do Exrcito (Army Historical Museum) and a coastal defense fort that is the actual Fort Copacabana.

The Carioca Aqueduct is located in the centre of the city, in the Lapa neighbourhood, and is frequently called Arcos da lapa (Lapa Arches) by Brazilian people. Since the end of the 19th century the aqueduct serves as a bridge for a popular tram that connects the city centre with the Santa Teresa neighbourhood uphill, the Santa Teresa Tramway.

Escadaria Selarn, also known as the 'Selaron Steps', is a set of world-famous steps in Rio de Janeiro, Brazil. They are the work of Chilean-born artist Jorge Selarn who claimed it as "my tribute to the Brazilian people.
In 1990, Selarn began renovating dilapidated steps that ran along the front of his house. At first, neighbours mocked him for his choice of colours as he covered the steps in fragments of blue, green and yellow tiles the colours of the Brazilian flag. It started out as a side-project to his main passion, painting, but soon became an obsession. He found he was constantly out of money, so Selarn sold paintings to fund his work. It was long and exhausting work but he continued on and eventually covered the entire set of steps in tiles, ceramics and mirrors.

Botafogo is a beachfront neighbourhood. It is a mostly upper middle class and small commerce community, and is located between the hills of Mundo Novo, Dona Marta (which separates it from Laranjeiras) and So Joo (which separates it from Copacabana). The word Botafogo also refers to a Latin American ballroom dance move, named so because the area of Botafogo is where it originated.

Flamengo is located between Catete and Botafogo districts on the edge of Guanabara Bay. The beachfront area is dominated by the Brigadier Eduardo Gomes Park, also known as Aterro do Flamengo, built on nearly 300 acres (1.2 km) of land reclaimed from the bay and completed in 1965. The park features gardens designed by well-known Brazilian landscape designer Roberto Burle Marx.

Lavradio street is a famous place in Lapa district because it has several antique shops, bars and restaurants that attract people all the time. On the first weekend of each month there is a street fair that concentrates national and foreign tourists and locals who know of the local fame. The bars occupy the streets with small tables and several stalls market everything, which gives a respectable agglomeration