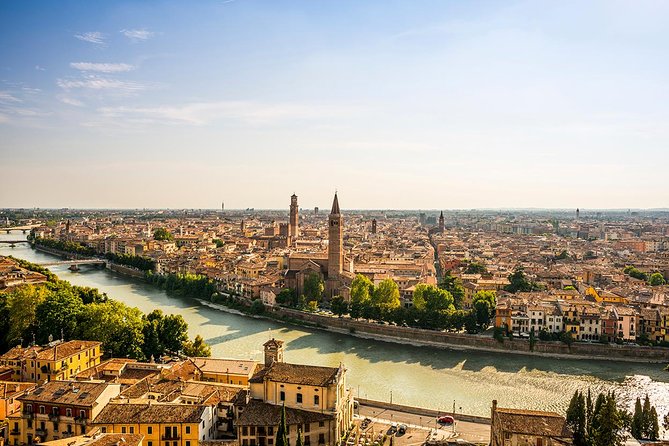 Verona is one of the most romantic cities in Italy, and not only because Shakespeare drew on its history, culture, and architecture to write his immortal romance, Romeo and Juliet. From Verona Arena, medieval castles, and glorious churches, to its frescoed houses, Gothic tombs, charming piazzas, and stunning vistas, its bursting with sites that will charm and delight travelers of any age. This day trip from Venice will whisk you out of the lagoon and into this fairytale city with a local Verona tour guide on hand to bring its turbulent history and beguiling charms to life.

Your day starts early in Venice, from where youll be spirited away to Verona in an air-conditioned mini bus, straight to a photo stop at Colle di San Pietro. Enjoy the panoramic views of Verona from above and learn to understand why it was the perfect setting for the worlds greatest romance. Starting our tour from the foot of a castle overlooking the town, youll take it all in at once. The towering spires, the castle walls, the river that hugs its curves: Verona is as romantic as it gets.

After some stunning photos from the viewpoint (sure to be the envy of your friends) youll take a lovely walk down into the city. Along the way youll stop off for a skip the line visit to the ancient Roman amphitheatre, a 1st century marvel that is one of the greatest amphitheatres in Italy and also among the top opera venues in the world. Youll also see the Verona Duomo from the outside, and pop into the beautiful Basilica of Saint Anastasia.

Then its on to Veronas top attraction: The home of Shakespeares Juliet, where, from the outside, you gaze up at the famed balcony where Romeo is said to have done his wooing. There is also a statue of Juliet herself whose breast you can rub for good luck - just make sure Romeos not around.

With that box ticked, well take you into the historic center to uncover the real story of the city that served as the colorful backdrop for Shakespeares classic. Youll visit the gorgeous plazas, Piazza Bra and Piazza delle Erbe to see the Palazzo Maffei, the Palazzo Barbieri (Town Hall) and the famous Mazzanti Houses whose facades are decorated with beautiful 16th-century frescoes. Youll also stop by the Piazza Dante to pay your respects at the statue of Italys most famous writer.

Lunch is not included, so you can choose where you want to eat or ask your guide for recommendations. Local specialties include risotto, polenta and even donkey meat!

With your belly full the afternoon will included a walk along the river past the Casa di Romeo - yes, that Romeo - and two very famous arches, the ancient Roman gates of Porta Borsari and the Arco della Costa, where youll learn about one of most bizarre local legends ever (it involves a pure-hearted person and a dangling whale bone).

Youll also get a chance to pay your respects at the Scaligeri family tombs - incredible examples of gothic architecture that hold the remains of one of Veronas most important families - gape up at Lamberti tower, and saunter over the iconic Castelvecchio bridge, all before your guide puts you back on the train to Venice.

Our small group tours offer unparalleled access to your expert, English-speaking guide. In their capable company you wont just see Verona, youll walk through the heart of its history and culture to get a deep, personal understanding of what makes it such a special place.

Small groups of 15 people or fewer

Unfortunately we are unable to accommodate guests with mobility impairments, wheelchairs or strollers on this tour