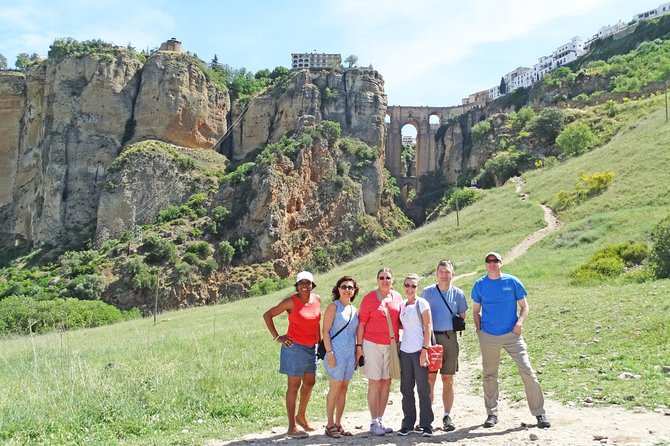 Absorb the history and culture of Andalusiaon this full-day privateRonda and Setenil de las Bodegas day trip, from Seville. Tour Ronda, one of Cdizs most stunning villages, known for its bull-fighting tradition and its historic bridge connecting the old and new town. Learn about the towns strategic role in the Catholic reconquest of Al Andalus. Enjoy a visit to the picturesque village of Setenil de las Bodegas, marveling at its peculiar architecture and the houses built into caves.

Visit Ronda, an Asset of Cultural Interest, split by Tajo del Ronda, a chasm more than 500 feet (150 meters) deep. Celts, Phoenicians, Romans, and Arabs inhabited the area before its reconquest by the Catholic monarch. See the old towns Arabic influences and medieval layout south of the Guadalevin River. North of the riverbed you will find the citys more modern area, developed starting in the 16th century. Several bridges connect the two halves of the city, one of the most fascinating stops on the Sun Coasts road of the white villages in Serrania de Ronda.

One of Spains oldest cities, Ronda originated in the Neolithic age, according to archeological findings. Proof of human presence can be found in cave paintings, most importantly at Piletas Cave, one of the most notable examples of Paleolithic cave paintings in Andalusia. Rondas fame comes from its proximity to the territories conquered by the Catholics of Castilla during the Nazari Kingdom of Granada. After the conquest of the city by the Catholic Monarchs in 1485, the city experienced deep cultural and economic changes, some of which can be observed today in structures such as open squares as broad streets.

Setenils distinctive urban beauty makes it one of the Sierra de Cdizs main tourist destinations. Houses sit below, on top, and even inside the rocks, creating different street levels with charming nooks and corners, such as those on Calle de las Cuevas de la Sombra and Calle de las Cuevas del Sol. See a present-day village that originated in medieval times, and visit the area known as Setenil, which stands on the ancient Almohad settlement. Marvel at the 14th- to 15th-century medieval castle and fortress overlooking the village.

A minimum of 04 adults per booking is required