Route Of John Paul II: Hill Of Crosses, Tytuvenai, Shrine Of Our Lady Of Siluva - Vilnius

Route Of John Paul II: Hill Of Crosses, Tytuvenai, Shrine Of Our Lady Of Siluva - Vilnius 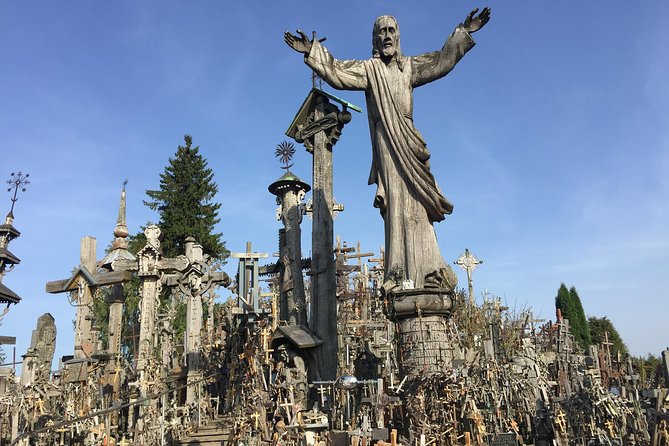 Day tour out of Vilnius to seefollow Pope John Paul II pilgrimage trip in 1993. Full day tour will head to most sacred sites of Lithuania.

During this private day tour you will be able to explore most interesting sites, which Pope John Paul II did visit. Pope John Paul II was the first Roman pontiff who visited Lithuania in September 1993. His pontificate is related with Lithuanian religious and national revival, and the re-establishment of Lithuanian Republic in 1990. In the very beginning of his pontificate John Paul II spontaneously pronounced his famous phrase: Half of my heart is in Lithuania.
The tour will include two sites which were visited by Pope - Siluva Shrine of our lady and Hill of the Crosses, and one extra site with beatyfull monastery of Tytuvenai.
Tour starts from Vilnius and heads to Siluva. Since the beginning of the XVI century Siluva has been famous for the indulgenced Feast of the Nativity of the Blessed Virgin Mary. Siluva is famous for the first widely known apparition of the Mother of God in Europe. Today Siluva is one of the most important pilgrimage sites in Lithuania with its ancient tradition of the indulgenced Feast of the Nativity of the Blessed Virgin Mary.
Next stop will be Tytuvenai monastery. Tytuvnais Church of Our Lady of the Angels and Bernardine monastery complex are among Lithuanias largest and most significant specimens of 17th and 18th century sacred architecture, reflecting as they do a multi-layered harmony of the gothic, mannerist and baroque styles. The ensemble consists of a church, a courtyard with the Holy Steps Chapel, and the stone wall of a two-story monastery. The main altar of the church features a painting of the Mother of God and Child which is famed for special.
Last stop of the tour is Hill of Crosses. The Hill of Crosses has about 100 000 crosses. The Hill of Crosses ia an historical architectural monument, it is a unique composition of folk art. The Hill of crosses atract's people with it's peace, spirituality, authenticity and sacred nature. The Hill of crosses in Lithuania has left a deap inpression on Pope John Paul II. Also by initiative of Pope was build  Monastery close to the hill.

After the visit tour will head back to Vilnius.