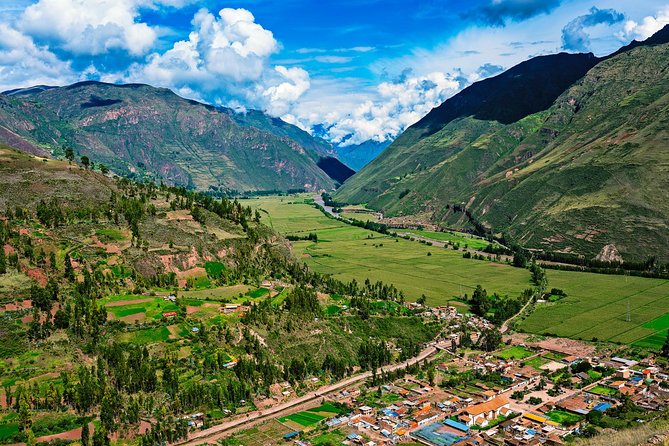 Sacred valley
The Sacred valley became an area of royal estates and country homes for the Inca, for the religious establishment and also agriculture one of this was the maize, a prestige crop for the Incas, to make chicha, a fermented maize drink the Incas and their subjects consumed at their many ceremonial feasts and religious festivals.
On this full day of Sacred valley tour you will visit impressive constructions of cities such as Pisac and Ollantaytambo, which still working their water fountains coming from the mountains rivers. The Sacred valley tour will take you around local villages, and meet local people with their traditional costumes that it will add up an unforgettable experience to your journey

Stop At: Sacred Valley of the Incas, Cusco Region

At 8.30am, we pick you up from your hotel and take you to the start of the tour. We travel from Cusco, past Saqsaywaman over the mountains towards the Sacred Valley. We descend 1500 feet to the valley floor, where we find ourselves by the sacred Urubamba River and the village of Pisac. In Pisac, we stop to visit a traditional market, where you can browse and buy some local souvenirs if desired. We will spend about 30 minutes here.
Then, we drive up to the ruins of Pisac. Here, we explore the extensive ruins whilst enjoying stunning views over the valley. You will be given a guided tour of the Citadel of Pisac, in which we will see temples, homes, altars, carvings, tunnels, caves and the famous Intihuatana, "The hitching post of the sun". We have about 90 minutes to explore the ruins.
For those who would prefer to spend more time in the market instead of visiting the ruins, advise your guide so he can organize a time and place to pick you up when returning through the market.
We continue on towards Urubamba, where we make a stop (45 minutes) for lunch(not include). A 30 minute drive takes us to Ollantaytambo, which is surrounded by the sacred mountains. Here, we will spend about an hour. In Ollantaytambo, we get further exposure to Incan constructions, mainly the amazing temple of the sun, enormous blocks of rock perfectly carved and polished, stone water fountains, stairs and terraces. We also get to see the beauty of the local people in their traditional dress surrounded by the sacred mountains and Valley of Patacancha and Willoq.
On our return, we make a quick (30 minute) visit to the famous church and archaeological site in Chincheros. We return to Cusco at about 6:30-7pm.

Entrance to the Sacred Valley sites: You can purchase one of the following: Cusco Tourist Ticket (130 soles or around $45 USD and 50% discount for students with an ISIC card)

Entry/Admission - Sacred Valley of the Incas

Note: The Cusco Tourist Ticket is about 130 soles or around $45 USD and there is 50% discount for students with an ISIC card. You can also use this ticket on the city tours OR purchase a partial ticket which allows a one day visit of just the two sites of Pisac and Ollantaytambo. This ticket is recommended if you are not planning to visit any of Cusco's other sites