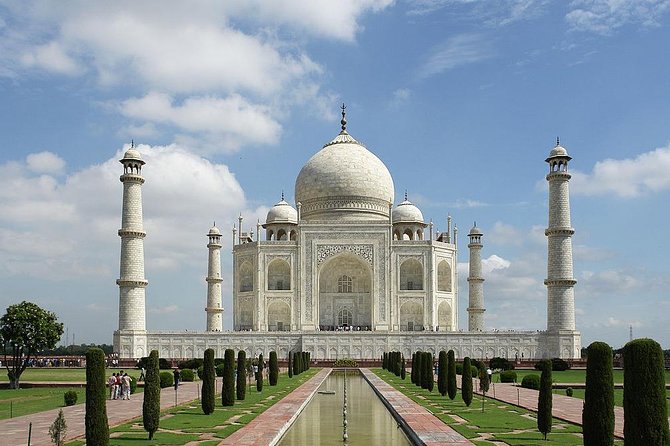 Travel to The City of Mumtaj Mahals Love Icon Taj Mahal, Agra in air-conditioned comfortable Vehicle. Visit one of the world's most iconic monuments of Agra India. The Taj Mahal is probably the best known monument to love that was ever built. Admire its majestic architecture as your local guide talks about its history and enjoy a visit to some of India's most spectacular sites as you relive the beauty of the old Mughal Empire.

Our Driver will come to pick you up from you hotel and drive to Agra. Enjoy 3 hours ride to Agra via Yamuna Express Way.

Meet Your Tour Guide (English language) on Arrival - After That Proceed to Taj Mahal. Visit Taj Mahal with you Tour Guide, it was built by Mughal Emperor Shah Jahan for his beloved wife Mumtaz Mahal
Note: Taj Mahal remain closed on Friday.

After visiting Taj Mahal, proceed to Agra Fort. It was built in 1565 A.D. by Great Mughal Emperor Akbar.

After the end of fort moving towards lunch providing you different flours of this city.

This is an optional to visit; if you are in hurry you can skip it. Exploring the back side of a Taj Mahal. Here you will see the magnificent reflection of Taj Mahal over the river Yamuna during the time of sunset.

After exploring Taj Mahal, Agra Fort, Lunch and Mehtab Bagh our assistant will drive you back towards Delhi by car.
After arriving Delhi, our assistance (driver) will drop you at the Hotel or Airport for youre on wards journey or flight back to your sweet home.