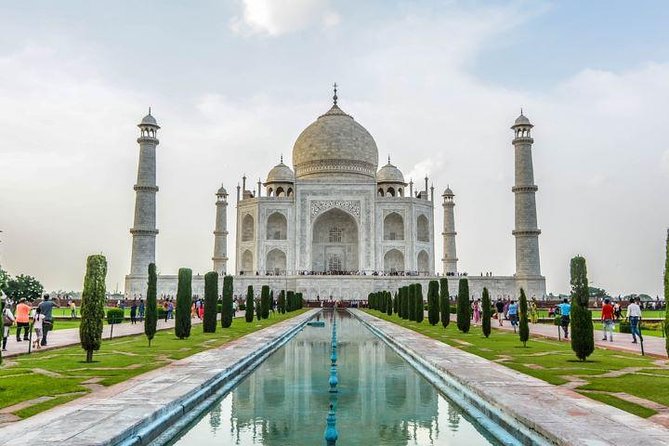 Apart from our Professional attitude we believe in "Customer Service with a Smile" and also stick to our Indian Culture following " Atithi Devo Bhava" meaning customer is God for us. We take care of our customer's till they are with us & we are very much approachable. Moreover we pass on the Authority to our customer's to plan & control their tour as we are flexible with the itinerary. In simple words we give power to our customer's to make changes in the itinerary as per their wish.

Itinerary
This is a typical itinerary for this product
Pass By: Toll Plaza Yamuna Expressway, Taj Express Highway, Uttar Pradesh 203135, India
Yamuna Expressway or Taj Expressway is a 6-lane, 165 km long, access controlled expressway, connecting Greater Noida with Agra in the Indian state of Uttar Pradesh. It is one of India's longest six-lane controlled-access expressway stretches. It is also known as Taj Expressway which has SOS booths along the route besides a toll free helpline. CCTV cameras are installed every 5 km along the expressway for safety and accident assistance.
Stop At: Taj Mahal, Dharmapuri, Forest Colony, Tajganj, Agra 282001 India
Visitors from all over the world flock here to marvel at the striking features of the famous Taj Mahal which is built by a Mughal emperor Shahjahan in the memory of his beloved wife, it is an astonishing memorial to never-ending love and admiration. The colour combination of lush greenscape reddish pathway and blue sky over it showcases the monument in ever changing tints and moods. Roam around, sit, relax, click pictures or if you are interested in sketching do that as well (Need to take along the Paper and Sketches yourself), admire the beauty and be lost in the thoughts of the Mughal era as your tour guide explains every titbits and the stories behind this majestic monument.
Duration: 3 hours
Stop At: Agra Fort Rakabgani, Agra 282003 India
Red Fort of Agra which is located near the gardens of the Taj Mahal. This powerful fortress of red sandstone encompasses, within its 2.5-km-long enclosure walls, the imperial city of the Mughal rulers. It comprises many fairy-tale palaces, such as the Jahangir Palace and the Khas Mahal, built by Shah Jahan; audience halls, such as the Diwan-i-Khas; and two very beautiful mosques. Take notice of intricate ornaments on mosques, palaces, and audience chambers connected with landscaped gardens and splendid water features. Walk around with your tour guide with live commentary which will make you live the moments of Mughal era. Click pictures and admire the view of Taj from where the Mughal Emperor Shahjahan did. Enjoy your day.
Duration: 2 hours
Stop At: Mehtab Bagh, Nagla Devjit Etmadpur, Agra India
Visit Mehtab Bagh Sunset Point . It's the back view of Taj Mahal
This is an optional site to visit, if you are in hurry you can skip it. Exploring the back side of a Taj Mahal. Here you will see the magnificent reflection of Taj Mahal over the river Yamuna during the time of sunset.
Duration: 30 minutes
Stop At: Itmad-ud-Daula, Moti Bagh, Agra, Uttar Pradesh 282006, India
Tomb of I'timd-ud-Daulah is a Mughal mausoleum in the city of Agra in the Indian state of Uttar Pradesh. Often described as a "jewel box", sometimes called the "Bacha Taj or Baby Taj", the tomb of I'timd-ud-Daulah is often regarded as a draft of the Taj Mahal.
Duration: 30 minutes

We recommend wearing comfortable shoes as there would be a lot of walking to be done.

We recommend wearing Sunglasses on a hot and sunny day.