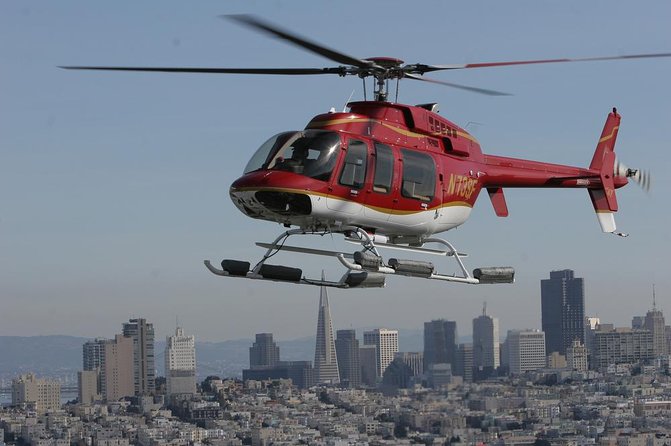 On this San francisco Vista Helicopter Tour, the sky really is the limit. A helicopter tour is the ultimate way to admire beautiful San francisco, highlighting the bay and its famous sights. So come and admire The view on a flight over the bay!

Your 37-mile (60-kilometer) flight lasts for 15-20 minutes in a Bell Jet helicopter, and takes in the well-known landmarks of San francisco. You'll see the Ferry building, Alcatraz island, the city skyline, Golden gate bridge, Bay bridge and much more!

Background music accompanies your flight, along with spontaneous narration by your professionally trained pilot.

Minimum of 4 passengers required for flight to be confirmed

All of the Bell Jet Helicopters are maintained by Bell Factory Approved Mechanics and are flown by Bell Trained, FAA licensed pilots

All flights are taken in quiet, smooth and reliable Bell Jet helicopters seating 4 or 6 passengers

The weight restriction for this flight is 300lbs (136 kg). All passengers must be able to properly use standard aircraft safety belts

Recommended: Comfortable shoes and a extra layer of warm clothing

All items carried on-board are subject to search. Large bags and backpacks are discouraged

Weather permitting. If seasonal fog obscures the view, tour route may be altered

Prior to your travel date, all passenger heights, weights and contact details MUST be advised. If you do not indicate this at the time of booking, you will be required to call the tour operator and advise them of this information directly. The contact details will be on your voucher once you have a confirmed booking