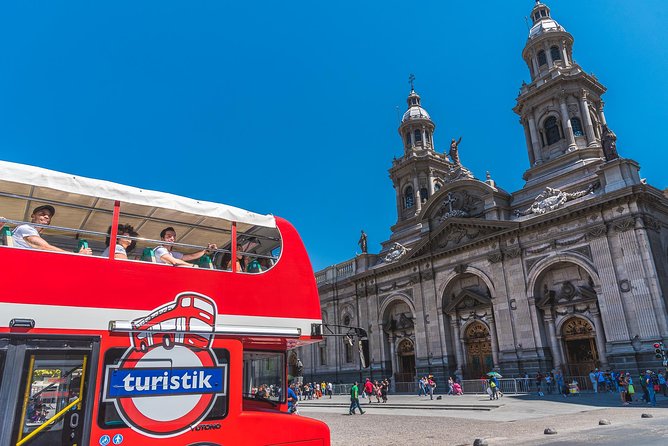 Marvel at the best of Santiago from an open-top double-decker bus, complete with informative commentary. You'll have the option to hop on or off as many times as you like or continue on the bus doing the entire route! The Santiago Hop-On Hop-Off Tour allows you to discover the capital of Chile in depth and with greater flexibility than ever before!

There are 13 stops along the city route, each one with a different point of interest and in close range of a renowned Santiago attraction. You can hop on and off as many times as you like along the circuit between the hours of 9:30am and 6pm. The loop lasts about 2 hours and buses pass by each stop approximately every 30 minutes.

Whether you're a first time or repeat visitor, the Santiago Hop-on Hop-off bus tour offers unlimited value over one day. Air-conditioned and equipped with audio commentary, customize your travel with the flexibility to jump on and off at various locations throughout the city at your leisure.

Please see the itinerary field below for a detailed list of stops.

Parque Arauco:
This is Chile’s most important mall and one of the most important in Latin America. Here you'll not only find the best products of the best brands, but also find a center of entertainment, with an open air boulevard with excellent gastronomical alternatives, theaters, bowling and ice skating.
Hotel Sheraton and Lo Contador:
Only a couple of blocks from this stop, you'll find Lo Contador Arts and design campus of the Universidad Catolica which is located in the historic Lo Contador farm house and is a beautiful example of the Spanish influenced architecture of the late 18th century. Also a only a couple of blocks away, you'll find the Providencia Contemporary Sculpture park inaugurated in 1986 and which houses more than 30 large format sculptures of relevant Chilean artists on its 2 hectare ground. The Hotel Sheraton and Lo Contador stop is located right across from the main entrance of the hotel.

Bellavista:
The Bellavista neighborhood is one of Santiago’s cultural centers. Here you'll be able to find the Metropolitan Park with the zoo, the funicular and its wonderful views; la Chascona, the museum-house of Pablo Neruda; an important variety of theaters, cafes, restaurants and pubs; and a significant number of shops which sell items which are based around the Lapislazuli, the semi-precious blue stone which is only extracted from Chile and Afghanistan. The Metropolitan Park with its 722 hectares is the largest urban park in Chile. The San Cristobal hill which forms part of the park has its highest point at 860 meters above sea level, which makes it the best point for viewing Santiago’s remarkable extension. The Bellavista stop is located on the Bellavista avenue across from #112.

Plaza de Armas:
The Plaza de Armas represents the real heart of Santiago. From the Plaza de Armas stop (Monjitas Street across from #821) you'll be able to visit and see some of the city’s most relevant historic buildings which include the Metropolitan Cathedral, the Santiago City Hall, the Central Post Office, the Casa Colorada and Santiago Museum, the former National Congress, the Royal House of Customs and Precolombian museum, the Judicial Palace, and the Palacio de la Real Audiencia and National Historic Museum.

Plaza de la Constitucion:
Here you will find the famous Moneda Palaca which acts as the seat of the Presidency of the Chilean government. Its construction was undertaken between 1784 and 1805 according to the project of the Italian architect Joaquin Toesca, and its original purpose was to be the Royal Mint house, the reason for its name. In 1846 President Manuel Bulnes used an area of the building as the Presidents’ residence, being the first president to live there; and later, President Carlos Ibanez del Campo, the last one there in 1958. From the Plaza de la Constitucion stop (Teatinos Street across from #254) you'll be able to see and visit buildings and places of interest which include the Constitution Square, the Moneda Palace, the Palacio de la Moneda Cultural Center, the Metropolitan Government building, the Santiago Stock exchange, the Union Club, the Bulnes boulevard, and the Dieciocho neighborhood.

Santa Lucia:
The Santa Lucia hill constitutes a good image of the lifestyle of Santiago’s high society of the late 19th and early 20th centuries. The Santa Lucia hill has been one of the most relevant places in Santiago since the city was founded by Pedro de Valdivia on the 12th of February of 1541. The hill’s monumental neoclassical entrance was completed in 1902, and harmonizes around a sculpture of the god Neptune an architectonic unit with curved stairways, fountains, and a spacious terrace with a triumphant arch crowned by a dome. From the Santa Lucia stop (Libertador Bernardo O’Higgins avenue across from #406) you'll be able to see and visit buildings and places of interest which include the Santa Lucia hill, the National Library, the Paris-Londres neighborhood, the main building of the Universidad Catolica de Chile, and the Lastarria neighborhood which has a strong cultural character where you will be able to find art galleries, restaurants, and cultural centers.

Providencia:
The history of Providencia dates back to 1897 and is directly related the sisters of the Divine Providence who arrived to Chile from Canada in 1853. The amusing part is that their landing here was due to the fact that their original destination, which was Oregon in the U.S.A., was flooded, and not knowing how to return to their home country, they met the captain of a Chilean ship who brought them to this remote corner of the world. Providencia is an important area of the city’s commerce and gastronomy. In its surroundings you'll find the Schacht Palace and the Providencia Cultural Center; the traditional Pedro de Valdivia and Ricardo Lyon avenues; and many fun shops, cafes, and restaurants. The Providencia Stop is located on the Lota street across from #2229.

El Golf - Sanhattan:
Known as Sanhattan (mix of Santiago and Manhattan), El Golf is the new financial and hotel district in Santiago. The Area of El Golf receives its name due to the exclusive Los Leones Golf Club which is located here, however it also known by some as Sanhattan, name which mixes Manhattan and Santiago. This is the new financial and hotel district in Santiago, and its strong development from the 1990s onwards in part is explained due to the important amount of high level executives which live on the east side of the city which were looking to decrease the travel time to their offices. Here you can find some architectural elements of the 1940s and 1950s which remind of times when this was the most exclusive residential area of Santiago; and a predominance of office buildings, where some represent the best of the modern architecture. The El Golf stop is located on the Vitacura avenue across from #2841.

Mercado Central (Central Market):
Originally built to house exhibiotions of local artist, the Central Market was converted to a marketplace in 1872. Today this picturesque premise acts as a food-supply market and is a greatly visited showcase of Chilean seafood. Typical dishes off the Chilean table are prepared in the heart of the market, including the famous Conger eel broths and seafood cauldrons.From the Mercado Central stop (Puente Street across from #889) you'll be able to see and visit buildings and places of interest which include the Estacion Mapocho, the monument to Chile’s Naval Glories, and “La Piojera”.

Bellas Artes:
The National Fine Arts Museum, one of Chile’s most important museums, has approximately 3000 pieces of art which include paintings, sculptures, and drawings and which extend from the colonial period up to present. This neoclassic building integrates Art Nouveau elements and was designed by Emilio Jecquier. It was built at the beginning of the 20th century along with other public buildings, parks, and monuments for the celebration of the Centennial Anniversary of Chile’s Independence. The museum is open to public Tuesdays through Sundays. From the Bellas Artes stop (Museo Nacional de Bellas Artes entrance) you'll be able to visit and explore buildings and places of interest which include the Forestal Park, the Santa Lucia hill, the Lastarria neighborhood, and the Municipal Theater.

Bracelet and headphones (to be collected before yo start your tour)

Tickets are valid for one day and can be used between the hours of 9:30am and 6pm

Important: You must exchange this voucher for a Hop-on Hop-off ticket at Info Centers located in different areas in Santiago. You will receive there your bracelet and the headphones for the audio tour. You will find detailed information in your voucher.

Wheelchair accessible, however there is a large step to get on the bus and you must be able to stand (with driver assistance) in order to board