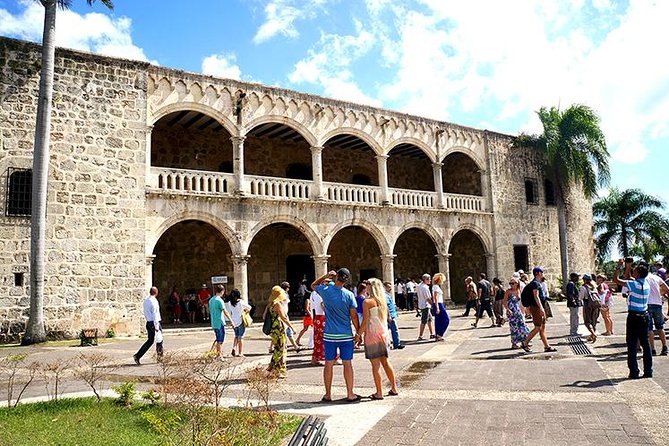 Enjoy a day trip to Santo Domingo and visit the oldest city of the Americas! Come and join us to experience walking through Santo Domingo, the city where the history of the Americas started. Visit the first cathedral of the new world, Diego Columbus Alcazar, the famous Las Damas Street, and some other 5th-century colonial monuments. You'll also have panoramic views of the downtown, residential areas, and the National Presidential Palace. Your best shopping option will be at the colorful market of Santo Domingo. Lunch will be served at a typical Dominican restaurant.

Visit the oldest city of the New World and Christopher Columbus' first permanent settlement after his "discovery" of the Americas. Declared as a UNESCO World Heritage site in 1992, Santo Domingo is a city of many firsts in the New World with the first cathedral, paved road, university, hospital, stone home, tavern, and much more.
The journey from Punta cana to Santo Domingo is of approximately 2.5 hours, depending on how long the group stops midway at the gift shop and to use the restrooms. Our first stop in the capital will be at the Three Eyes National Park with underground caves and lagoons, used by the Taino Indians (the Dominican Republic's original inhabitants). Then there will be a quick photo stop at the Columbus Lighthouse, built in 1992 on the 500th anniversary of Christopher Columbus' landing in the New World. Next visit is to one of the oldest streets of the Western Hemisphere located in Santo Domingo's Colonial Zone, a 16-square block neighborhood oozing with Dominican history and culture.
The first peek at the Colonial Zone comes at the Columbus Palace. Completed in 1514, it was the home of Christopher Columbus's son, Diego. From the palace, the group will walk through the historic Plaza de Espana and onto Calle Las Damas (the first paved street of the New World). Our final destination is one of the most important sites in the Dominican Republic: the First Cathedral of the New World.
Lunch will then be served at one of the top Dominican restaurants in Santo Domingo, known for its excellent home-style cooking and typical dance performances by the waiters and waitresses. After lunch, you will get to pass by some of the modern areas of the capital and the National Palace where the Dominican President and the highest level government officials have their offices.
To end the day, you will be able to take some time to visit a spacious gift shop selling nearly every Dominican keepsake imaginable.
With this day trip to Santo Domingo, you'll experience the city's rich history and the daily life of everyday Dominicans in their capital of 3 million inhabitants.

Headsets in some of the monuments with language selection

Entry to the monuments are all-inclusive, with an audio guide