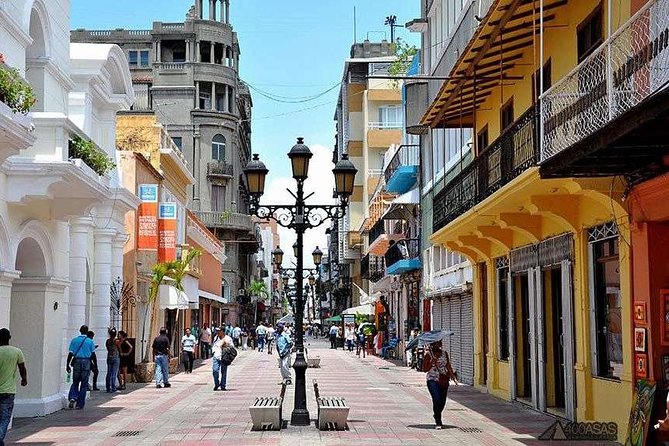 Visit the oldest city of the New World and Christopher Columbus' first permanent settlement after his "discovery" of the Americas. Declared a UNESCO World Heritage in 1992, Santo domingo is a city of many "firsts" in the New World with the first cathedral, paved road, university, hospital, stone home, tavern and more!

You will be picked up at your Punta Can hotel in a comfortable, air-conditioned van, mini bus or bus (depending on the group size). You will be greeted by an experienced professional who will be your personal guide from the day's start to finish.

The first stop in the capital will be at the Three Eyes National Park with underground caves and lagoons used by the Taino Indians, the Dominican Republic's original inhabitants. From there, you'll make a quick photo stop at the Columbus lighthouse, built in 1992 on the 500th anniversary of Christopher Columbus' landing in the New World. Then you will be off to the oldest streets of the Western Hemisphere in Santo domingo's Colonial Zone, a 16-square block neighborhood oozing with Dominican history and culture.

Your first peek at the Colonial Zone comes at the Columbus Palace. Completed in 1514, it was the home of Christopher Columbus's son, Diego. From the palace you will walk through the historic Plaza de Espana and on to Calle Las Damas, the first paved street of the New World. The ultimate destination is one of the most important sites in the Dominican Republic: the first cathedral of the New World.

Lunch will then be served at one of the top Dominican restaurants in Santo domingo, known for it's excellent home style cooking and typical dance performances by the waiters and waitresses. After lunch, you'll pass by some of the modern areas of the capital and the National Palace where the Dominican president and the highest level government officials have their offices.

At theend the day, you will have some time to visit a spacious gift shop that sells nearly every Dominican keepsake imaginable. With this city tour to Santo Domingo, you'll experience the city's rich history and the daily life of everyday Dominicans in their capital of 3 million inhabitants.