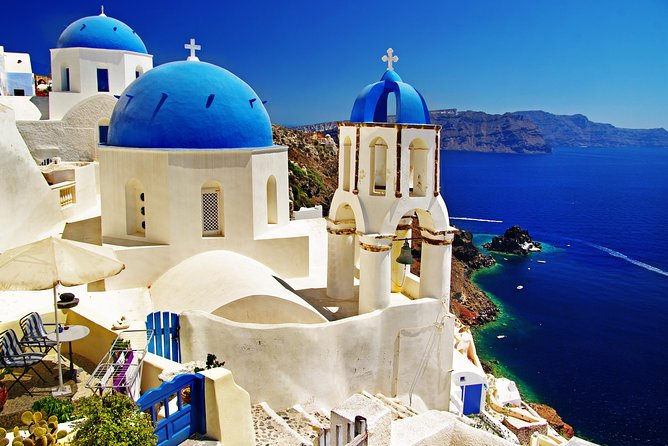 Get to know Santorini on a full-day independent trip from Crete, and see as much of the island as you wish! Either soak up the sun with a book on the beach, or explore the pretty island towns and villages. Discover the delights of Fira or Oia; take a cable car ride from the volcanic caldera to the old port; scout out cozy island tavernas; or impress the children with a donkey ride! How you enjoy your time on Santorini is up to you; just note that any entrance fees, activities or meals are at your own expense.

Start your day trip with a pickup from your Crete hotel, and then travel by air-conditioned minibus to the port to board ro SuperFerry and/or SUperFerry II boat.  The boat departs at 07:40 am, and the cruising time between Santorini and Crete is roughly three hours, so settle in and gaze out at the sea as you are taking your breakfast on board and prepare yourself for a day of exploring the island of Santorini.

As soon as you arrive to the port of Santorini, you are getting on the bus for a guided tour to Oia and Fira. The Land Excursion begins with a visit to the northwest part of the island where the town of Oia is located. Despite its enormous tourist appeal and development, Oia has remained true to its traditional character. One can admire the old neo-classical manors as well as the houses carved on the rock. Oia is the most graphic village with a fantastic view, narrow streets and marvellous mansions. This picturesque village is well known for its beauty, eye-catching blue-domed churches and dramatic volcanic views  After that, the excursion continues to the town of Fira, for sightseeing and souvenir shopping in the beautiful landscape and walking through the narrow pebble streets. One can enjoy a meal looking at the unique contrasting beauty.

At the end, guests can visit Kamari Beach  for swim, which is one of the most famous in Santorini because of its black sand and its clear crystal water or can visit Perivolos.

Return to port at the prearranged time, and then hop aboard your boat for the crossing back to Crete at estimated arrival time 21:30 pm, while having dinner on board. Your day trip finishes with a drop-off at your Crete hotel