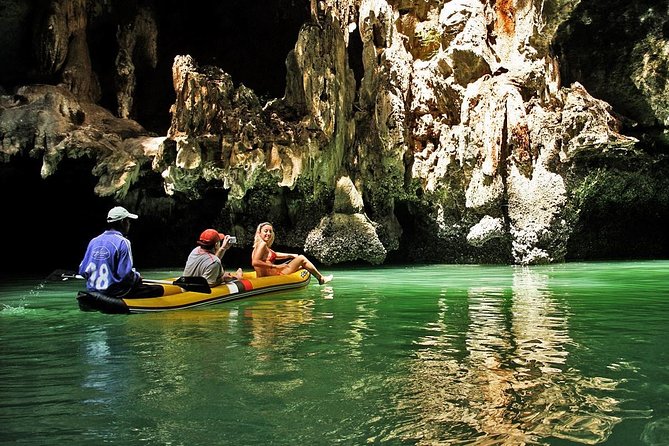 Enjoy an afternoon of sea cave exploring in Phang Nga Bay, including the limestone caves and hidden cliff-lined lagoons discovered by John Gray in 1989. Expect a great nature and wildlife adventure with an experienced guide and enjoy the best Thai seafood buffet during your holiday aboard the convenient escort boat. Finish your trip after dark by floating your own self-made flower Kratong in a spiritual and spectacular natural light show.

This full-day kayak trip from Phuket starts at midday to avoid the crowds, with a convenient pickup service by luxury air-conditioned minivan from the entire Phuket Island. Dont eat lunch, as you will be served a healthy and nutritious meal onboard the comfortable and modern twin-engine escort boat after leaving from Ao Po Pier. During the boat ride you will watch a raptor show and get a detailed briefing about the nature and geological site of Phang nga bay. Learn the basic dos and donts of how to securely enter the caves and hongs.

Start the first kayaking session with your well-educated and experienced guide through limestone caves and lagoons in the dramatic setting at Panak Island. The hand-made kayaks are specially designed for your trip, and you can feel absolutely safe because there was never a capsize, a puncture or any accident. Your professional guide paddles you and your partner through 'Tidal Nape' sea caves inside Phang Nga Bays marine limestone karstic islands into 'hongs' (Thai for room). The hidden cliff-lined lagoons are populated with macaques, water monitors, kingfishers, mud-skippers, egrets, sea eagles and brahminy kites. Return to the escort boat and move on to the second island with two more caves and hongs to explore.

You will finish after dark by floating your own self-made flower Krathong in a spiritual and spectacular natural light show. Guests say that the evening Loi Kratong ceremony complete with fireflies and dinoflagellates (bio-luminescent plankton) is a 'spiritual experience'.

Eat a delicious seafood/vegan buffet on the trip back, you return to the pier two hours after sunset. Only the highest-quality ingredients are used to prepare the lunch and dinner, fresh from the local market. Seafood is net caught and chickens are free range. Brown, red, and black rice is served with homemade Massaman curry.

Kayak equipment including a dry bag