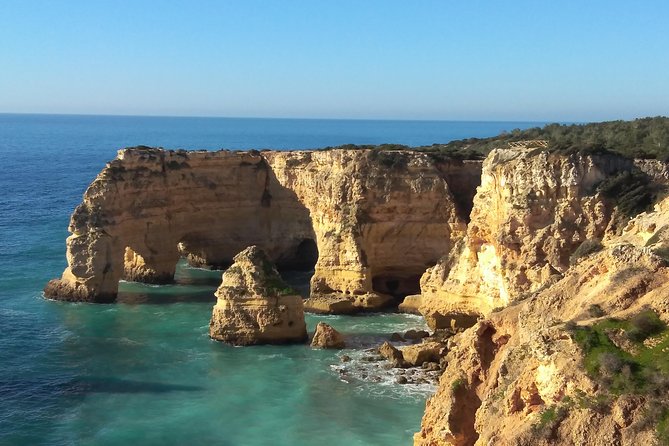 The Van Tour start in Albufeira,

We visited the marina of Albufeira and the most beautiful beaches

-Secrets beaches in the area

allowing our guests to enjoy a wonderful walk along the wooden walkways in the Salgados lagoon,

in contact with nature in the wild, and its natural species, bird watching

We continue our Van Tour through the beautiful Algarvian cliffs and the most beautiful beach in Portugal,

our guests have the opportunity to once again enjoy the beauty of our coast, strolling along the wooden walkways.

After this wonderful walk back to the hotel we stop at a farm producing fruits from the Algarve,

This experience is ideal for small groups that enjoy nature

Duration: 30 minutes
Stop At: Praia Sao Rafael, Urbanizacao de Sao Rafael, Albufeira 8200-613 Portugal
This small beach has fine gold sand and crystal clear water and is backed by golden limestone cliffs.
On the beach itself there are many limestone rock formations,
which have been eroded over a long period of time to form interesting formations and shapes many of which have names such as Ninho das Andorinhas

Duration: 30 minutes
Pass By: Praia Gale, Estrada da Gale, Gale, Albufeira 8200-385 Portugal
Praia da Gal is the eastern end of the wide sandy bay.
These carbonated rocks of warm colors and very rich in marine fossils, also called concheiros, testify to a past time when the sea level was further inland.
Nowadays they are very sculpted by rainwater and polished by the sea, covered by plants adapted to the salsugem like the soda.
In the areas where sand accumulates, mainly in the western sector, you can still see the typical plants of the dunes,

Stop At: Lagoa dos Salgados, Gale, Albufeira 8200 Portugal
Located on the ancient salt marshes of Pera, the Salgados lagoon
has become in recent years one of the bird watching places
most visited in the Algarve.
Visit:
The distribution of birds in this location varies greatly depending on the water levels in the lagoon,
Although the area is not very large, the route can be divided into two distinct segments: the area
south and west zone. Both routes start at the car park.
South Zone
This path runs along the southern part of the lagoon, parallel to the dune cord. It is done through
the wooden walkway that runs along the south bank of the lagoon, therefore offering no
difficulty and allows to observe several species of birds.
Duration: 30 minutes
Stop At: Nossa Senhora da Rocha Beach, Armacao de Pera Portugal
Praia de Nossa Senhora da Rocha (although sometimes called Praia da Senhora da Rocha) is a beach in the parish of Porches, in the municipality of Lagoa, region of the Algarve, in Portugal.
There is a small fishing community that received the popular name of Senhora da Rocha in tribute to the Virgin Mary devoted in an ancient hermitage besieged at the top of a jetty where there are also the remains of the Fort of Nossa Senhora da Rocha. This pier and beach are used as a refuge for fishermen's boats.