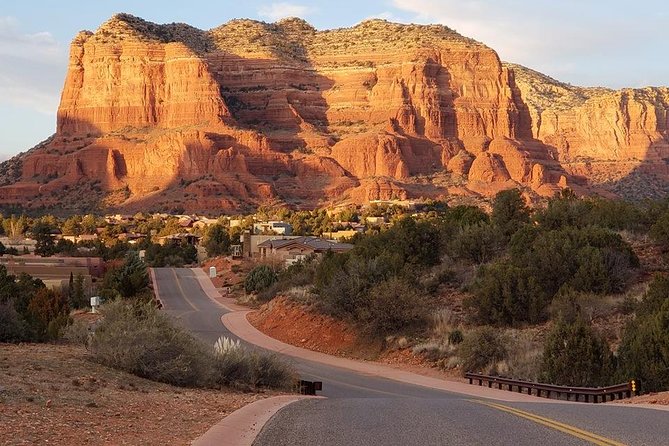 Scenic Sedona is home of the enchanting red rocks. This tour is a memorable introduction to the Sedona area. Visit the landmarks including the Chapel of the holy cross, Airport mesa Overlook, Cathedral rock, Bell rock, Courthouse Butte, and one of the most Beautiful drives in Arizona ~ Oak creek canyon. Your experienced and knowledgeable guide will share the geology, history and some of the legends of this popular area. This is a private luxury tour, for your party only!

Itinerary
This is a typical itinerary for this product
Stop At: Chapel of the Holy Cross, 780 Chapel Rd, Sedona, AZ 86336-7064
The chapel was inspired and commissioned by local rancher and sculptor Marguerite Brunswig Staude, who had been inspired in 1932 by the newly constructed Empire State Building to build such a church. After an attempt to do so in Budapest, Hungary (with the help of Lloyd Wright, son of architect Frank Lloyd Wright) was aborted due to the outbreak of World War II, she decided to build the church in her native region.
Duration: 30 minutes
Stop At: Cathedral Rock, Yavapai County, Sedona, AZ 86351
Cathedral Rock is a natural landmark on the Sedona, Arizona skyline, and is one of the most-photographed sights in Arizona, USA.[3] Cathedral Rock is located in the Coconino National Forest in Yavapai County, about a mile (1.6 km) west of Arizona Route 179, and about 2.5 miles (4.0 km) south of the "Y" intersection of Routes 179 and 89A in uptown Sedona. The summit elevation of Cathedral Rock is 4,967 feet (1,514 m).
Duration: 30 minutes
Stop At: Bell Rock, 4999 State Route 179, Sedona, AZ 86351-8995
Bell Rock is a popular tourist attraction just north of the Village of Oak Creek, Arizona, south of Sedona in Yavapai County. With an elevation at its summit of 4,919 feet (1,499 m), it is just west of Courthouse Butte.
Geologically, Bell Rock is a butte, composed of horizontally bedded sedimentary rock of the Permian Supai Formation.
Duration: 30 minutes
Stop At: Oak Creek Canyon, Route 89A, Sedona, AZ 83149
Oak Creek Canyon is a river gorge located in northern Arizona between the cities of Flagstaff and Sedona. The canyon is often described as a smaller cousin of the Grand Canyon because of its scenic beauty. State Route 89A enters the canyon on its north end via a series of hairpin turns before traversing the bottom of the canyon for about 13 miles (21 km) until the highway enters the town of Sedona. The Oak Creek Canyon Sedona area is second only to Grand Canyon as the most popular tourist destination in Arizona.
Duration: 30 minutes
Stop At: Sedona Airport Overlook, Sedona, AZ
The vistas are breathtaking from this mesa of red rock formations like "Coffee Pot", "Submarine Rock" and "Thunder Mountain". Take lots of memorable pictures!
Duration: 30 minutes

Passports are not needed.