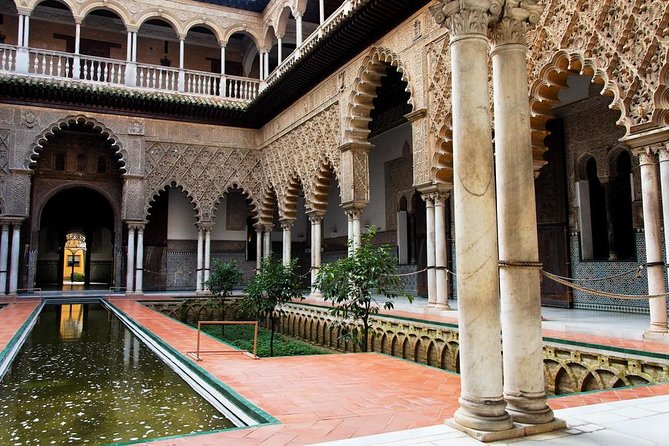 See the best of stunning Seville on this 4-hour comprehensive sightseeing tour by luxury minibus. With an expert guide, youll travel along the citys romantic streets, seeing all the top Seville attractions. Look out for Plaza de Espaa and see two UNESCO World Heritage-listed sites in the Santa Cruz quarter -- Seville Cathedral and the incredible Royal Alcazar Palace.

Leave your central Seville hotel and hop on board your luxury minibus for a 4-hour sightseeing tour, taking in Sevilles most captivating monuments.

Pass Plaza de Espaa the must-see square in Maria Luisa Park and hear how it was created for the 1929 Ibero-American Exposition Worlds Fair. The lavish park was redeveloped into Moorish-style gardens, and the square was designed to be its pice de rsistance. Built in a classic Renaissance Revival style, the square is now home to several eye-catching Government buildings and a large central fountain.

As your minibus winds its way through the city, your guide will point out other top Seville attractions like the Palace of San Telmo with its ornately decorated Baroque exterior, and Torre del oro (Tower of Gold) the intriguing building that once held precious metals and gold from America.

Head through Sevilles Santa Cruz quarter and see why so many describe it as the citys most picturesque neighborhood. As you pass along its inviting little streets, watch out for its two UNESCO-listed attractions. See King Juan Carlos official Seville residence, Royal Alcazar Palace (or Real Alcazar Palace as it's known in Spain), and gaze in awe at Seville cathedral one of the largest Gothic cathedrals in the world.

After four hours of taking in the top Seville sights, your tour finishes back at the historical center of Seville.

Some hotels are not accessible by vehicles, in which case your pickup and drop-off will be at the nearest available point

Seville Cathedral is closed to the public on Sundays and bank holidays due to religious services. Instead you will visit a different monument.