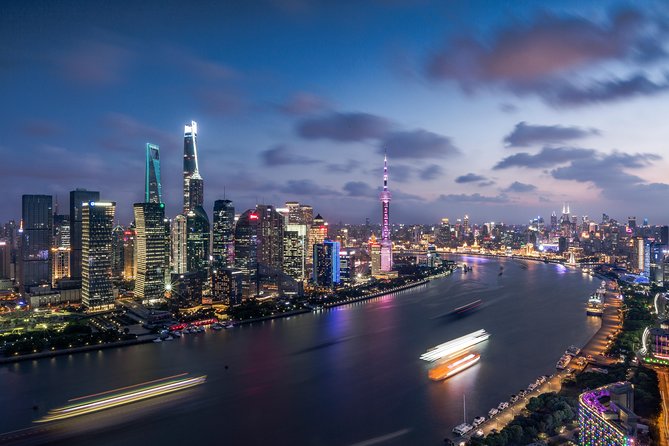 Experience Shanghai at night on this four hour tour with English-speaking guide. Cruise along the Huangpu River and see the the illuminated skyline. Wander the iconic Bund area. Then, take in one of Shanghai's most spectacular views from the 88th floor of the Jin mao tower. Pickup and drop-off provided to your centrally-located hotel.

You will be picked up in your hotel lobby at 6pm. Then watch as the sun sets and city lights come on as you sail along the Huangpu River. Enjoy the night sky and the beautiful city skyline. You will enjoy the great views of The bund and Pudong area from the water. See the impressive neoclassical buildings that the Bund is best know for and the bright city lights of Pudong.

Disembark and take a stroll in The bund area. You will be able to see the beautiful architecture up-close. As you make your way down the boulevard, you will see the Jin mao tower. It is the highest and biggest observation deck in all of China. Complete with a shopping mall, offices and the Grand Hyatt Shanghai Hotel, the building is magnificent. Take the elevator to the 88th floor for a view of all of Shanghai. It is an experience that you won't forget. Return to your hotel at the end of the tour is included.

Please note that there may be a wait as there are several cruises per day, and the exact departing time will be notified when your guide collects the pre-reserved tickets at the Port. During holidays and typhoon season, the next available cruise can be held up to 90 minutes after arrival.

Hotel details are required when book this tour