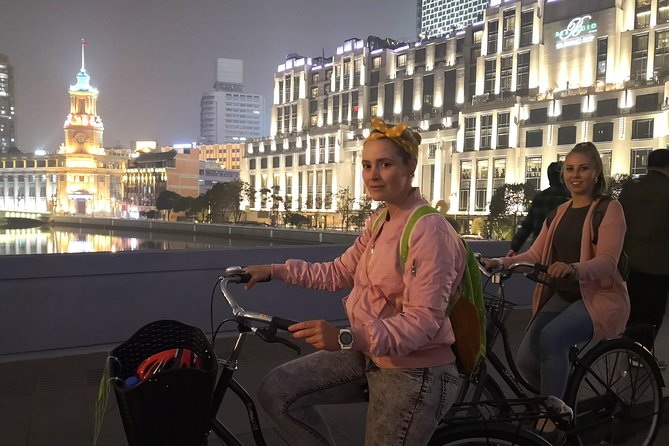 Enjoy a romantic and charming night of sleepless Shanghai-china">Shanghai on a 4 hours bike tour from 18:00-22:00 in the evening with Chinese vintage bicycle and professional tour guide, this trip features informative introduction from your guide as you cycling through the scenic spots.You will have a chance to see what the locoal do,what are the night entertainment in Shanghai.Explore the little-know narrow alleyway of the Old town all the way to the dazzling lights of The famous Bund,cycle around the famous ancient temple & Ming Dynasty Gardens.Explore the local lifestyle & customs. Get familiar with intriguing history of the Paris of the East.
Experience the Shanghais night life with and eye from a locals aspect.

Enjoy a brief introduction of the city and a short safety explain,then you'll be ready for your 4 hours cycling trip.Departing from Japanese Concession,you first head to Duolun celebrity historical block,take in the stunning views over the iconic cable stone street.After cycling to Sichuan commercial market street.After ride to the Bund what which well know is the best scenic spot of the city.From there viewing the Huangpu river and the fabulous neon light skyline of Shanghai.It also know as "gallery of world Architecture" include 23 historical buildings in a line which were built mostly in 1920s and 30s with the earliest in 1906.Your guide will share you interesting stories about it.Other sights during the tour include Yu Garden area from Ming Dynasty,Nanjing Road,People Square,foodie street,night market and much more.You can get as close as to the local nightlife as you can and enjoy the incredible night scene.Your professional guide will tell expert commentary along the way.At last, return your bicycle & part ways with your guide back at the starting point