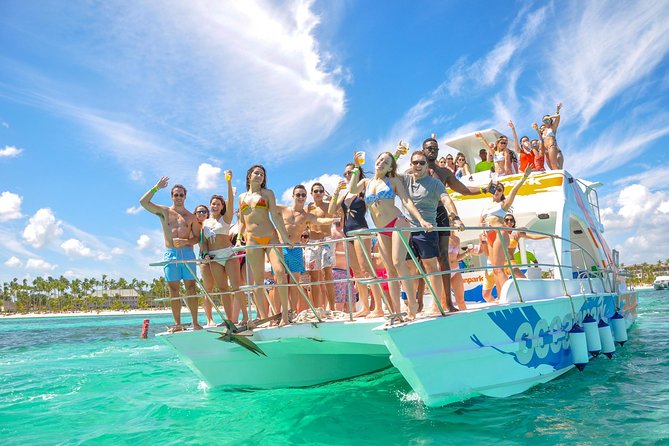 Save money and enjoy four activities in one tour on this Punta Cana combo package. Snorkle, Explore the barrier reef, sharks, stingrays, and natural swimming pool all while you cruise thecoastline ofPunta Cana on a 4-hour all-inclusive catamaran tour. A pristine double-deck catamaran takes you from stop to stop. A bartender will serve unlimited drinks at the open bar while the DJ plays great music. Your lively and animated crew will ensure that you have the best time of your life. Encounter docile sharks and sting rays. Discover anexclusive snorkeling site and an underwater world full of unique sea life and beautiful corals.

After pickup from your Punta Cana hotel, you will arrive at the beach where you will get on board one of the most beautiful catamarans in Punta Cana. The friendly crew will provide the best entertainment and assistance with the highest standards of professionalism. Lead by a dedicated team of local bilingual Dominican guides, enjoy an incredible time out on the waters of Punta Cana. The catamaran cruise will take you to some of the best reefs where you can go snorkeling and see nurse sharks and stingrays.

Between shallow clear waters and the warm tropical temperature, youll go on a fascinating tour by the coast of Punta Cana-Bvaro beach. The first stop is in the snorkeling site. There, under the supervision of our professional divers, you will be able to observe stunning coral reefs and feel numerous colorful fish.

After enjoying this marine show, head to a marine park inhabited by gentle giants: harmless sharks and sting rays, to experience the thrill ofencountering these marine animals up close. This will all happen under the supervision of the professional divers, who are ready to answer any of your questions. Experience the excitement of the crystal clear waters of the Caribbean coast!

With the sound of the waves gently lapping the shore, continue sailing to reach a fantastic and refreshing natural pool. Its is ideal for a swim or just enjoying with a cold beer in hand. There will be a floating bar with refreshing drinks available while the DJ enchants you with their musical vibes. Experience the excitement of the crystal clear waters in the ocean with games, drinks and entertainment.

The unforgettable adventure ends as you sail towards the marina. Afterwards, feel free to pass by the souvenir shop to pick up a trinket to memorialize your tour. Finally, a comfortable bus will return you directly backto your hotel. .

Play the music of your choice !

Pictures and Videos (Available to purchase)

4 hours excursion including round trip transportation