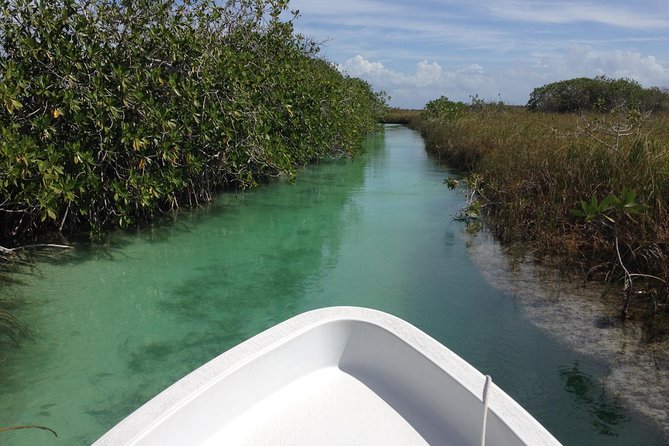 This is a unique combination of Culture and Nature in just one package. The trip begins with a visit to a small but very nice ruins called Muyils.
Then a boat trip will take you through two fresh water lagoons and you will be relaxing while floating down a canal....

You will be picked up from your hotel between 8 and 8:30am.
From there you will be heading to the Muyil Ruins where you will take a 30-minute guided tour.
Afterwards, you will be going on a 2-hour boat ride around Muyil andChunyaxch lagoons, and you will also be able to take a relaxing swim in the Mayan channel.
The next stop will be lunch in Tulum before being driven back to your hotel at around 3pm.

Sian Kaan Biosphere Reserve:
The protected, wildlife-rich area, over 5000 square km of tropical jungle, marsh, mangroves and islands on Quintana Roos coast have been set aside by the Mexican government as a large biosphere reserve.
Sian Kaan (which means where the sky begins) is home to howler monkeys, anteaters, foxes, ocelots, pumas, crocodiles, eagles, raccoons, tapirs, peccaries, giant land crabs, jaguars and hundreds of bird species.
There are twenty-three known archaeological sites inside the reserve. Discoveries of human remains, ceramic pieces, and other artifacts have been dated up to 2,300 years old.
The northern most section of Sian Kaan contains what is thought to be an ancient trade route through lagoons and mangrove channels between the cities of Tulum and Muyil. The 2 hour boat trip will take you to lagoons such as Muyil and Chunyaxch via this ancient Maya trade route and natural channels. You will be swimming in an antic Mayan channel and you will be floating through the mangroves in translucent water!

Muyil:
While Muyil is a less excavated site, it is significant for being one of the earliest and longest inhabited Mayan sites on the Yucatan. Pottery shards and other artifacts have been found dating back from as early as 350 B.C.E. to as late as 1200-1500 C.E.
Another factor that makes this Yucatan Mayan site unique is that it is an example of Peten architecture, a typical style of older, more southern Mayan sites with their steep walled pyramids such as Tikal in Guatemala.
Since most tourists tend to skip Muyil, it is an interesting site to visit for those looking for a more primitive experience.

A minimum of 4 people per booking is required