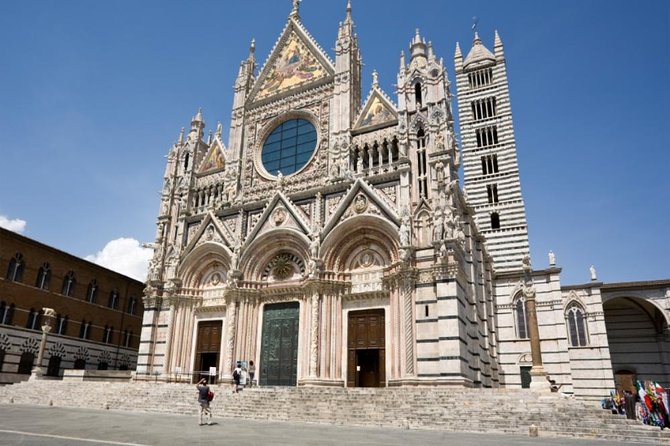 Spend a day in beautiful Siena, Tuscanys second-largest city, on a full-day excursion from Rome! After enjoying a scenic journey through the Lazio and Tuscan countryside, enjoy free time in Siena to get to know the city at your own pace. Meet back up with the group for a 3-course lunch, and then head out on an afternoon walking tour to see and learn about Siena Cathedral, Piazza del Campo and more.

Start your day with a pickup from your central Rome hotel or alternatively, meet your guide in central Rome. Then, travel north to Siena, passing through the Lazio region and into picture-perfect Tuscany, an area where pretty hilltop towns cling to verdant hills and cypress trees dot the countryside. Look out of your coach window to see the vineyards and olive groves for which Tuscany is famous, before arriving at the regions second-largest city: Siena.

Hop off your coach and make the most of some free time to explore the city on your own. In bygone times, Siena rivaled Florence for its power, wealth and artistic beauty; today the city holds a reputation as an urban gem, characterized by its elegant architecture and landmarks. Perhaps use your free time to stroll around Sienas UNESCO World Heritage-listed Old Town and admire its countless historical sights.

Meet back up with your group for lunch in one of the city centers restaurants, and then head out on a walking tour with your guide to get to know Siena a little better. Explore Piazza del Campo, the central city square, and learn about its use as the venue for the annual Palio horse race. Hear fun facts about the citys famous contrades (neighborhoods with legacies of traditions) as you walk, and then head inside Siena Duomo, the citys famous Gothic cathedral.

After exploring the main areas of interest in Siena, return to your coach and relax on the journey back to Rome. Your tour then finishes with a drop-off at the central Rome start point in the evening.

Please note: This is a multilingual tour

the tour starts with a Minimum of 6 pax . There is a possibility of cancellation after confirmation if there are not enough passengers to meet requirements. In the event of this occurring, you will be offered an alternative or full refund

A dress code is required to enter places of worship and selected museums. No shorts or sleeveless tops allowed. Knees and shoulders must be covered for both men and women. You may risk refused entry if you fail to comply with these dress requirements