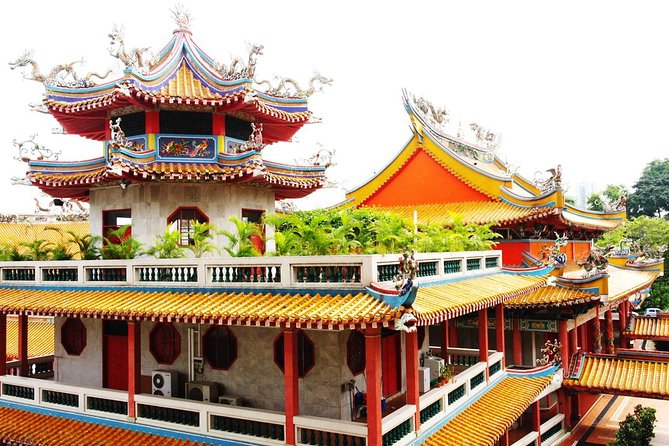 Take a round-island tour of Singapore that will give you an interesting insight into life and history outside the city center. Begin your morning with a leisurely walk along Singapore's highest pedestrian bridge - Henderson waves, learn about the Chinese folklore at Haw par villa, then pay respects to the brave heroes WWII heroes at Kranji War Memorial. Your tour will also bring you to Bright Hill Temple to admire the spectacular architecture and gardens. You will drive past Selarang Barracks and Changi where your guide will share stories like the infamous revolt of British and Australian POWs during WWII. Hotel pickup and drop-off and lunch at a local restaurant included.
*****Haw par villa WILL BE CLOSED FOR RENOVATION WITH EFFECT 01 DECEMBER 2018. IT WILL BE REPLACED BY JURONG HILL PARK*****

Start with a leisurely morning stroll along Singapore's highest pedestrian bridge - Henderson waves and take in the lush greenery of Mount Faber and Telok Blangah Hill.

Continue west to Haw par villa, embark on an
unforgettable journey into Chinese folklore and
mythology at this park.

Journey North to Kranji War Memorial to pay respects to the countless World War II heroes. Unveiled in 1957, the memorial commemorates over 20,000 men and women who gave their lives for freedom in World War II

Lunch at a local restaurant before proceeding to Bright Hill Temple, a famous Chinese ancestral place of worship and admire its spectacular architecture.

We cross from North - Central to Eastern Singapore to explore the hidden paths and places that were not easily accessible to the average traveller. View from a distance Selarang barracks - where the infamous revold of the British and Australian POWs interned in a Japanese Camp in Changi.
Drive past Changi Air Base towards Changi Village where the old Changi Hospital is located. Along Changi Beach facing the Straits of Johore, we stop for 10 minutes for photos. In the distance, land reclamation has started for the construction of Terminal 5 which is expected to complete in 2030 and will handle 150 million passengers annually. If time permits, we may drive past and view the Johore Battery Monster Gun.

Admission to Gardens by the Bay Conservatories and OCBC Skyway