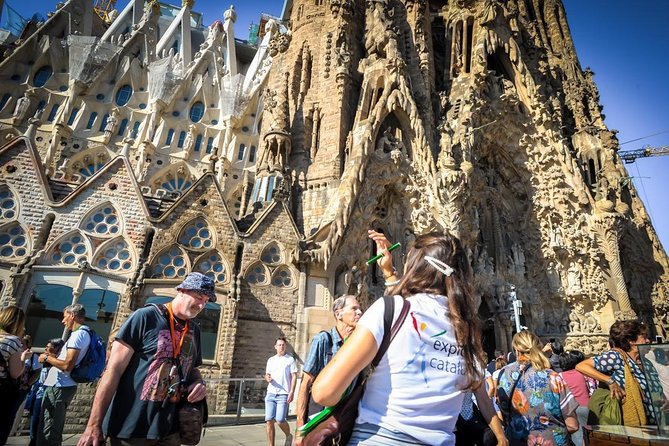 See the best of Barcelona on this private sightseeing tour, which offers a comprehensive view of this exquisite Catalan city and includes skip-the-line access at La Sagrada familia, a popular attraction that often has long lines. Perfect for first-time visitors, the tour will show you the citys most iconic sights and allow you to discover some of Barcelonas best-kept secrets. You will also visit the hill of Montjuc and the Gothic quarter, and you can upgrade to the full-day tour to include visits to Park Guell and La Pedrera. Accompanied by your own private guide, you'll enjoy personalized attention on this special private tour.
Please note: From January 11 to January 17 La Pedrera will be closed for maintenance. These are the regular works for maintenance performed annually and during the same dates. You will have the alternative to visit the Casa batllo instead.

Start your Barcelona sightseeing tour with a drive to Barcelona's famous hill of Montjuc, the site of the 1992 Olympic Games, which offers excellent views over the city. Then stop briefly at the Catalunya National Art Museum, and continue down to Plaa Espanya and on past the modernist buildings of the Eixample area.

On your way to La Sagrada Famlia, drive through Passeig de Gracia, home to designer stores and two of Barcelonas most renowned Antonio Gaud buildings La Pedrera and Casa Batll.

When you arrive at La Sagrada familia, your skip-the-line access allows you to avoid the very long queues and go straight in!

Youll then head to the oldest part of Barcelona, the Gothic quarter, where youll leave your coach and enjoy a walking tour through the narrow streets of medieval Barcelona. Stop for a complimentary glass of cava (Catalan sparkling wine) in a local market. From there, travel back to the early Middle Ages, visiting the Jewish Quarter, the Royal Palace, the original 2,000-year-old Roman temple and part of the Cathedral .

Continue to the Born district, where youll have free time for a quick lunch before heading to the magnificent Santa Maria del Mar church, one of the most beautiful in Barcelona. Your tour ends here.

This private tour of Barcelona is hosted by a professional guide. Please list any special interests you have (art, architecture, history, culture) at the time of booking to alert your guide, who will then prepare for your private tour.

Please note: From January 11 to January 17 La Pedrera will be closed for maintenance. These are the regular works for maintenance performed annually and during the same dates." You will have the alternative to visit the Casa batllo instead.

Upgrade:
Upgrade to the full-day private tour to include visits to two of Antoni Gaudi’s most fabulous sites – Park Güell and La Pedrera. At Park Guell, enjoy a private guided tour of the famous city garden, where you’ll be introduced to some of Gaudí’s most bizarre creations. At La Pedrera, you’ll skip the line again and have an hour to explore the interior of the building.

A glass of cava wine

Walking tour of the Gothic Quarter

Entry/Admission - Basilica of the Sagrada Familia

Please note: From January 11 to January 17 La Pedrera will be closed for maintenance. These are the regular works for maintenance performed annually and during the same dates." You will have the alternative to visit the Casa Batllo instead.

This tour operates in English only.