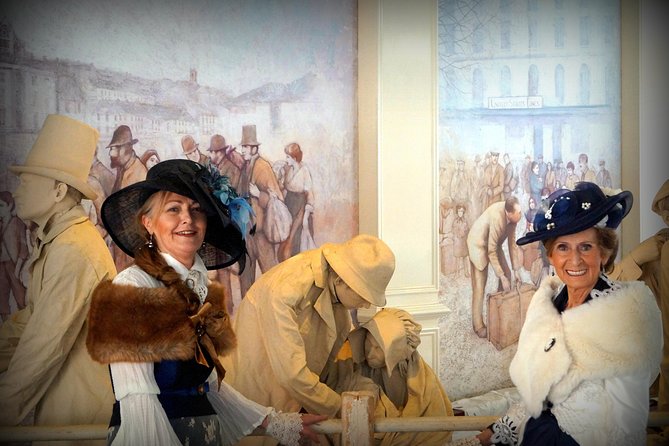 With such a rich History, Heritage and a story to tell, a trip to The Queenstown Story @ Cobh Heritage Centre is a must. This beautiful, informative cultural centre is inventively situated within Cobh's restored Victorian Railway station, a building holding its own historic story.
Given that so many from Ireland' past travelled through Cobh(Queenstown), one of the world's finest natural harbours, visitors can learn historic and emotive recounts of The Queenstown Story, where over three million Irish people emigrated from this port town in search of a new life.
Everything from the sinking of the Titanic and The Lusitania, to the transportation of the forgotten Irish who endured forced labour in Cromwellian times as well as the stories of emigration to North America is inventively displayed in a variety of modern, tasteful and artistic ways.
Relax, enjoy a coffee and "Walk in the Footsteps of our Emigrant Ancestors"

The Queenstown Story is a very emotive, interesting and educational experience. It tells the story of Cobh's history and legacy dealing with events in Irish and world history that have a close connection with Cobh. The main theme is the story of Irish Emigration, how and why it happened and how it still stirs emotion with descendants of those people. The story of how Irish men, women and children were sent as convicts to Australia and the conditions they had to endure.

Cobh has one of the finest nartural harbors in the world and therefore the exhibition has a maritime theme also and it recalls the close association between Cobh and the two great liner disasters the Titanic and the Lusitania. It is a self guided tour that has multi media and audio visual displays and is suitable for all ages. The tour lasts approx 45 minutes but one could quite easily spend a few hours soaking up all the history.

This tour includes the Queenstown Story exhibition above in addition to the famous Titanic Trail Walking Tour. The walking tour commences at 11am or 2pm each day and gives amazing insights into the real stories and historical environs of Cobh, tracing its buildings and monuments connecting the visitor to the underlying narrative of locations associated with Titanic. Entry to the Queenstown Story can be before or after the walking tour.