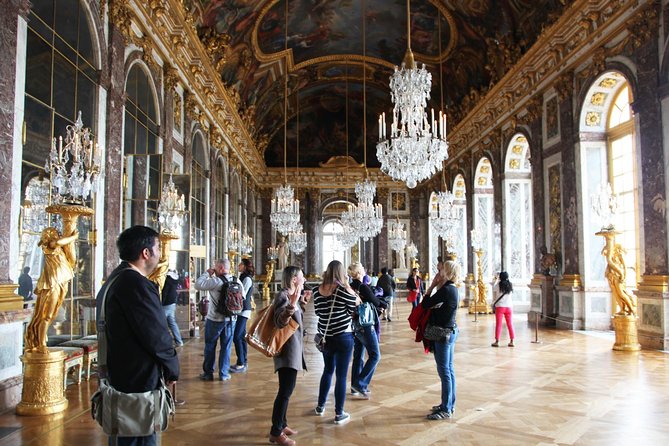 Theres only one way to visit the extravagant Palace of Versailles: in style. Arrive by private bus and view the Grand Apartments and State Rooms, the famous Hall of mirrors and Gardens in a tour designed for refined tastes.

Arriving from Paris in a comfortable private bus, accompanied by your expert guide, youll strut past the lines outside the Palace of Versailles in true royal fashion. As your guide shows you around a carefully curated selection of the palaces 700 rooms, youll hear stories of the Sun King, Louis XIV, his successors, their queens, mistresses, and courtiers including Marie Antoinette and other notable figures. Versailles had its heyday in the 17th and 18th centuries, when the Sun King elevated Louis XIIIs humble hunting lodge into the official seat of the French court and 300 years later, the palace has lost little of its glamorous excess.
The Gardens of the Palace of Versailles were designed by master gardener Andr Le Ntre and court painter Charles le Brun, not as a respite from the palace, but as an extension of it with every bit as much opulence (and intrigue) as the interior. Depending on the day, your tour of the Gardens may include the Musical Fountain Show (where fountains dance in perfect time to classical music) or Musical Gardens (where music accompanies your tour through the idyllic glades). Even if not, with your guides help, youll discover fountains, statues and secret groves scattered throughout the vast French formal estate.
Following the guided tour, youll have a free hour to revisit the most captivating sights or find new ones just for yourself. Surrounded by luxury, the only hardship is deciding how to follow an experience this spectacular.

Versailles Palace Walking Tour includes but is not limited to:

• Palace of Versailles + Gardens – King and Queen's Apartments, the Chapel, the 17th century galleries and the Hall of Mirrors, Hercules Drawing Room, Salon of Abundance, Venus Room, Diana Room (with a bust of Louis XIV by Bernini), Mars Room, Mercury Room, Apollo Room, War Room, Peace Room, King's bedroom, Queen's bedchamber, Salon of the Nobles, Coronation Room, Royal Chapel
• Palace of Versailles + Fountain Display – See the magnificent Versailles fountain show, known as the Grand Eaux. It’s a wonderful live concert held in the exclusive groves, designed by André Le Nôtre, where you can watch the fountains explode to the sounds of music. No show on Thursday.
• Palace of Versailles + Musical Gardens Show – Be enchanted by the musical gardens event –the Jardins Musicaux, as it’s known. Enjoy the simple beauty of classical music played in the beautiful surroundings of the Versailles Gardens. The musical gardens event runs on Tuesday. No show on Thursday, Saturday or Sunday.