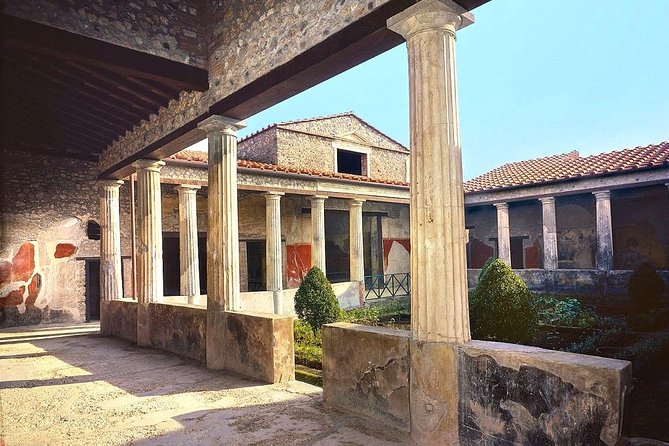 The Ancientcities of Pompeii and Herculaneum, known all around the worldbecause buried and almost destroyed by the Vesuvius eruption dated 79AD, disclose their ancient splendour to the visitors.
In fact, the ashes rain itself has helped to protect and preserve the uniqueness of these two sites. As you will see, despite the fact thatthey belong to the same historical period, the two archaeologicalsites do show many differences in the life style and the structure of the city itself.
You will get a full immersion into the Roman lifestyle,while your guide will picture all the aspectsof the political, social and religious life of the inhabitants of Pompeii and Herculaneum.
This theperfect tour for all the archeology lovers!

As everybody knows, the eruption of the 79AD has been fatal to thousands of people living in the areas of Pompeii and Herculaneum, two of the most ancient Roman cities, whose excavations have allowed archaeologists and anthropologists to actually get a large spectrum range of knowledge of the behaviours and the habits of the time.

In this comparative journey, your guide will highlight the particular character and the uniqueness of each city, picturing the past and making it coming back to life.

In Pompeii you will be shown the magnificence of the amphitheatre acoustics, walk onto the original pavement of the streets, enter into the shops and the ancient fast food restaurants. As well, the setting of the houses and the richness of their frescoes will leave you astonished. Your path will then lead you to the red-light district and the Forum the main square, where the political, religious, artistic and social aspects of the Roman life used to intertwine.

On the other side, even though smaller than Pompeii, Herculaneum has been recognised as a wealthier centre of activity and interest. From the private houses to the thermal baths ,the richness of the luxurious frescoes and mosaics shows the special character and style of this small city set on the Vesuvius slopes.

Furthermore, the real peculiarity of the cityis the wooden structure of the ceilings, the doors and many other items you can find into the houses for instance the chairs that have been literally burned and then preserved by the lava and the ashes: you will see them still standing and in really good conditions.

This amazing walking tour will definitely absorb you into the ancient times lifestyle a real once in a lifetime experience!

Get ready, and don't forget to bring your camera with you!

Confirmation to be received within 24h from the booking

We suggest you to wear comfortable shoes