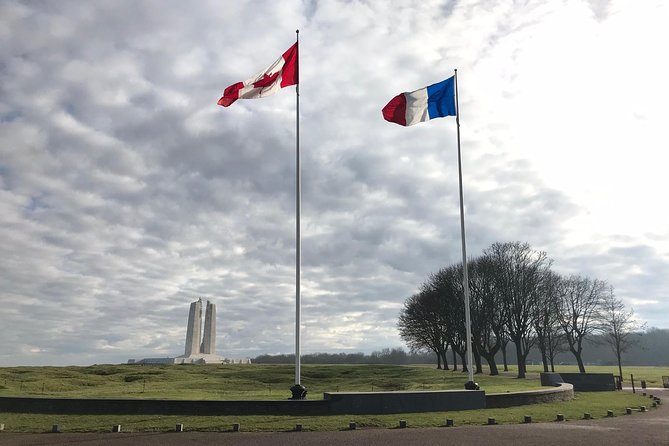 Discover France's World War 1 history on this small-group day trip from Paris to some of northern France's most famous battlefields and cemeteries. Venture to the region of Nord-Pas-de-Calais, formerly known as Artois, famous for the many WW1 battles that took place there. With your guide, visit the Cabaret-Rouge British Cemetery in Souchez and the Canadian National Vimy Memorial, commemorating the Battle of Vimy Ridge. Enjoy free time to explore Arras, the capital of the Pas-de-Calais department, and learn about the Battle of Arras at the Monchy-Le-Preux Memorial.

Enjoy a scenic drive to the Nord-Pas-de-Calais region of northern France. First, visit the Canadian National Vimy Memorial in the farming town of Vimy. With your guide, explore the 250-acre (100-hectare) park and learn how it served as the battlefield for the famous Battle of Vimy Ridge during World War 1. See the monument in the center of the park, where the names of thousands of soldiers are inscribed into the stone.
Next, head to the Cabaret-Rouge British Cemetery, located in the nearby town of Souchez. Named after a house that once stood there, this cemetery was designed by the architect Sir Frank Higginson and is one of the largest in the region. Follow your guide around the cemetery and learn about the 7,655 Commonwealth soldiers buried here.
Drive south to the capital of the Pas-de-Calais region, Arras, and enjoy free time to explore on your own and discover the city's spectacular squares. This historic center of the former Artois region, located on the Scarpe River, dates back more than 2,000 years. Your guide will happily recommend some places to enjoy lunch (own expense).

Then, relax on the drive back to Paris.